Some of the most functional nonprofit organizations in Sandpoint arose out of a need noticed by insightful residents. Sandpoint Community Resource Center, which celebrates 10 years in Sandpoint this month, is a prime example of how meeting a need can grow into something so much more. 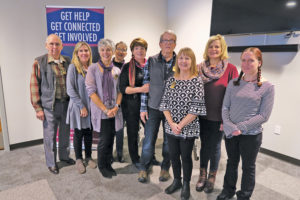 Staff, board members and volunteers pose after a monthly SPIN meeting at the Sandpoint Library. Photo by Ben Olson.

Ten years ago, Sandpoint residents Dave Pietz and Rich Crettol heard a disturbing story about a veteran living in his vehicle. Pietz and Crettol — both veterans themselves — asked each other, “Why is his living in his car? How can we help?” After driving around Sandpoint, the pair found the veteran and tried to help him connect with the many resources and programs available to help veterans in need.

“What they found was, it wasn’t that easy to get him to the right people,” said Linnis Jellinek, executive director for SCRC. “What they found was a lot of people saying, ‘Call here,’ ‘Call there.’ That was the birth of the Sandpoint Community Resource Center — it was two men and a phone who said, ‘We need some place where it’s easy to get help and get to the right resources.’”

A decade after its foundation, SCRC still remains true to its original mission: to cut through the confusing phone tag and agency runaround, bridging the gap between those in need and those who serve.

The mission has been updated — “Dedicated to bringing hope to people who don’t know where to turn” — but the core concept is the same, according to Jellinek.

“Now, we all refer to it as the ‘Hub’ for nonprofits to come and find volunteers and for volunteers to find a nonprofit where they want to spend their time, talent and resources,” she said.

SCRC resource specialists are always available to help those who need help with anything, whether it’s finding affordable housing options or something as easy as help with their cell phone, Jellinek said.

“It’s amazing the variety of people we see,” she said. “We had a guy come in the other day and he could only read lips, and he needed to listen to the messages on his phone to make a doctor’s appointment. Boom. Done. When he left here he was so happy. He was actually going to the library to plug in there and find a place where he could volunteer, so we helped him with that, too.”

SPIN, the Service Provider Information Network, is a program cultivated by the SCRC to help about 80 area nonprofits come together to talk about and respond to critical issues in our community.

“Because of how many different people groups we serve — veterans, homeless, teenagers, the LGBTQ community — we then serve all these different nonprofits who we partner with,” Jellinek said. “This helped us to form the community asset SPIN.”

The service doesn’t end once someone walks out the door.

“We follow up on everybody,” she added. “We almost become case managers. It’s important to find out [if] they go get the help we recommended, because not everybody does.”

In a fortuitous set of circumstances, SCRC was just nominated for a big award as part of Idaho Philanthropy Day, sponsored by the Boise-based Idaho Nonprofit Center. The state is divided into three sections — north, southwest and east — so SCRC is competing for the northern category with nonprofits based in Sandpoint and Coeur d’Alene.

“We were one of three honorees in northern Idaho and the only one from Sandpoint,” Jellinek said. “I was honored and humbled that we were nominated. We’re competing with Coeur d’Alene nonprofits the Kootenai Health Foundation and Gizmo-CDA, so we’re really excited.”

Jellinek said SCRC was nominated by the Idaho Community Foundation because, “aside from what we do helping people in need, they see us as a gateway for other nonprofits — especially for the help that we’re giving other nonprofits through our Volunteer Idaho Panhandle Program.”

The winners will be announced Thursday, Nov. 14 at a luncheon in Coeur d’Alene.

SCRC will be hosting a kickoff celebration for its tenth anniversary on Tuesday, Nov. 19 at Trinity at City Beach from 5-7:30 p.m. There will be appetizers and a no-host bar.

“Justin [Dick] was kind enough to close the restaurant for our event,” Jellinek said. “What we’re hoping is that people will come and leave a donation and sow into our community for the next 10 years. Every donation, small or large, makes a huge impact. A small donation becomes a large donation because of how we spread it around.”

Looking forward, Jellinek sees SCRC settling into its role nicely as the “Hub” between nonprofits and those in need.

“I want to let the population that we serve know that while they sometimes feel invisible in society, we see them,” Jellinek said. “We want people to know that we see you, we hear you and we know you’re there.”