Where the contented buffalo roams

Survivors Rescue provides a second chance for animals in need, including the well-loved buffalo Buffy

Steve Sanchez and his children first noticed the buffalo at Pend Oreille Farms last spring, during their regular commute on Highway 200 from the east side of the county to Sandpoint. 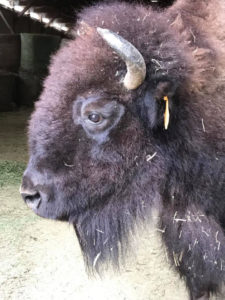 “We always look for her when we are driving into town,” he said.

The Sanchez kids aren’t the only ones keeping tabs on the the lone buffalo — Buffy has been turning heads since her arrival at the farm in late 2018, causing some to ask questions, chief among them: Why is she alone?

According to Pend Oreille Farms owner Dawn Dempsey, Buffy is completely at ease after much trial and error to get her comfortable in her new home. The 15-year-old bison was a Valentine’s Day gift from renowned late-local inventor Dr. Forrest Bird to his wife. When both Bird and his wife passed away a few years ago, Buffy wasn’t receiving the care she needed. That’s where Dempsey, founder of Survivors Rescue, came in. She formed a bond with Buffy until the animal finally trusted her enough to embark on the long trailer ride to her new home, where it became clear that she wasn’t about to roam the fields alongside cows.

“She was scared of the cows,” Dempsey said. “She’d jump back into her pen.”

Now, Dempsey said Buffy — though old for a buffalo and slowly going blind — is happy right where she is. Though she still doesn’t care for cows, she enjoys the company of nearby horses and she’s gentle with the chickens who often eat from the food bowl right alongside her.

“It’s important [people] know that she likes where she’s at, and if she didn’t, that little fence ain’t gonna hold her,” Dempsey said with a laugh. “She’s happy and content there. She feels safe.”

Buffy is just one of dozens of animals to find refuge through Survivors Rescue. Dempsey said she currently cares for about 45 horses, and the farm is home to a host of other critters, including Buffy. It is even home to a zebra named Gilbert.

The vision for creating that home for neglected animals first took root when Dempsey moved to Pend Oreille Farms in the late ’80s. The farm next door was a feedlot at the time, where horses would be rounded up periodically and taken to slaughter.

“I would see hundreds of horses over there, and hear the hooves clanging into the trucks as they loaded them,” Dempsey said. “It was really tough. I thought to myself, ‘One day, I’m going to stop that.’”

After 20 years in business, Dempsey retired and then worked with the neighbors to end their feedlot operation. She then launched Survivors Rescue — also known locally as The Horse Rescuer — and the undertaking is now a 501(c)(3) nonprofit organization.

Animals come to Dempsey’s farm through a number of avenues. In some cases, she travels to regional kill pens to rescue foals. Most of the time, though, she receives calls from locals who are aware of an animal in need.

In each case, Dempsey said, she feels as though she and the animals are destined to cross paths. 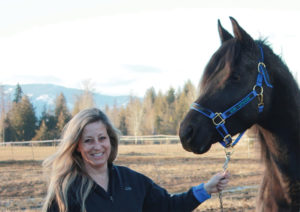 “I don’t find them. They find me,” she said. “The Lord brings me what I’m supposed to do, that’s just how it works. I don’t know how to explain it.”

There’s no doubt that rescuing and rehabilitating neglected animals for rehoming is a costly endeavor, making donations a vital part of what keeps the farm operating.

“I don’t have the time for fundraising. I’m doing the doctoring, the caretaking, the mucking,” Dempsey said. “So donations are huge.”

Dempsey said she often feels overwhelmed by the needs of the area, knowing full well she can’t save every animal on her own. By sharing Buffy’s story, and the stories of the countless other animals who have called Pend Oreille Farms home, Dempsey hopes she can make the crisis clearer to all who will listen, and that those who can take action, will.

“We have so many abused and neglected animals in these hidden mountains and hills that go unhelped and unnoticed,” she said. “There needs to be funding. There needs to be animal control. I need help … I’m one person. I can only do so much and my pocket is only so deep.”

Follow Buffy and the rest of the Survivors Rescue animals online at facebook.com/SurvivorsRescue. Donations can be made via Paypal to [email protected], or sent via mail to Survivors Rescue, Inc. at 34101 Highway 200, Sandpoint, ID, 83864. Contact Dawn Dempsey about volunteering, adopting an animal or visiting the farm by texting her at 208-290-6702.