Solar Roadways project back on track

The Solar Roadways demonstration project is making good progress once again after a slight delay to get all state partners on board. 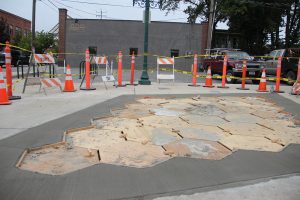 According to Sandpoint City Administrator Jennifer Stapleton, the announcement of a completion date should be coming soon now that all project partners have signed off. Once the project is ready for public display, Sandpoint will solidify its status as the home city of Solar Roadways with the premiere demonstration site for the technology.

Since the Solar Roadways project is new and unprecedented, getting clearance from every state stakeholder was no easy task, Stapleton said. This put the project on hold even as engineering of the panels progressed smoothly. It’s not a problem specific to Idaho, either—Stapleton said she’s taken calls from Baltimore officials asking how to clear through the red tape.

“Being the first project [of its kind], there are a lot of logistics to work through,” Stapleton said.