You may consider yourself a meat aficionado. You may even possess pillow covers and pajamas covered with bacon print. Perhaps you abhor the thought of consuming the flesh of another being, or you just don’t eat it for health reasons. No judgment, I can’t and won’t consume any wheat or milk.

Whatever your stance on the role played by your canine incisors, you are bound to discover some interesting information in this article.

Aside from cooking food on an open flame, sausage-making may be one of the oldest forms of cooking in the kitchen. Every time you fire up the ol’ grill and start charring some weenies, you’re upholding a tradition that goes back at least 1,000 (but likely very many more) years. 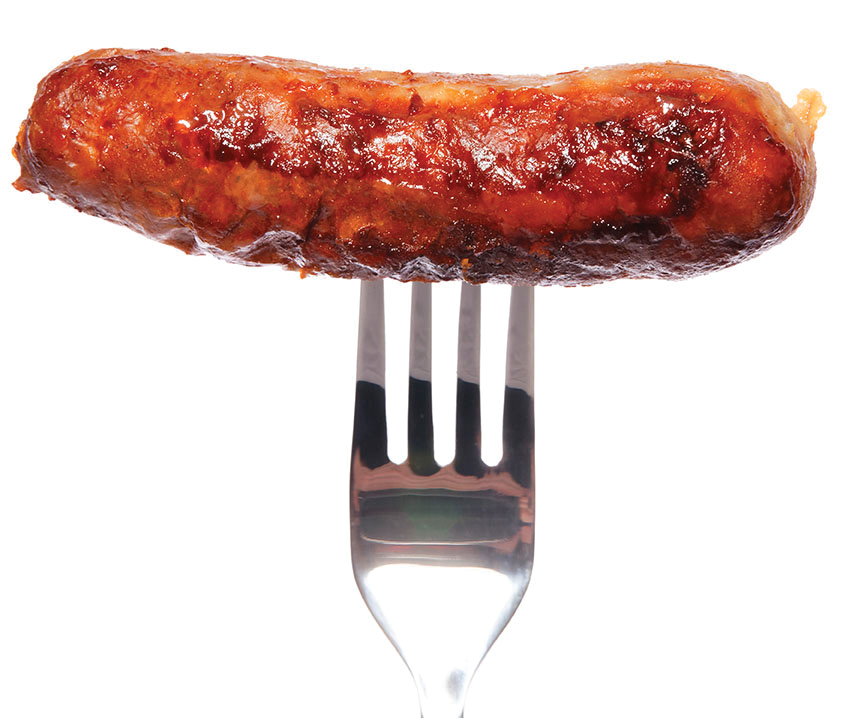 Take a bite, you know you want to. Courtesy photo.

The importance of sausages in the pre-refrigeration human diet cannot be overstated. Meat is a fickle thing that’s prone to spoilage, and spoiled meat can very easily kill someone when ingested. However, when mixed with fat, salt and seasonings, a magical thing happens: meat goes bad at a dramatically slower pace.

Left unattended in a lukewarm environment — between 40 degrees and 140 degrees Fahrenheit, often known as the “danger zone” in food prep circles — meat can spoil in as short a time as 20 minutes. That’s because the meat is dead, and dead meat is a natural conduit for bacteria. Bacteria break down the meat to make more bacteria — it’s the way of the world, and it’s how nature recycles just about everything, excluding plastics.

Enter: salt. Salt is a desiccant, which means it’s extremely good at pulling water from surrounding surfaces like a sponge; and, just like a sponge, there’s only so much water the salt can hold, which is why the salty ocean doesn’t just dry up.

When you add salt to meat, the salt pulls water from the protein and slows the bacteria’s ability to survive and propagate, meaning your meat won’t spoil as quickly.

While refrigeration was invented in the 1700s, it wasn’t available for home use until 1913. This meant that people had to cure or salt their meat to preserve it for longer than a few hours after butchering. This also means that pre-Industrial Revolution humans had a lot of salt in their diet.

Salt has been a hot commodity for a very long time. It was so important to the preservation of food that Benjamin Franklin secured a secret deal with Bermuda during the Revolutionary War to supply the revolutionaries with salt at a time when Britain had a massive amount of control over international trade.

But enough about salt, let’s get to the meat of the article.

Sausage-making is equal parts art and science, as any local hunter well knows. If you don’t include enough fat in your sausage, you end up with gamy, dry sausage that leaves a literal bad taste in your mouth. Yet, while sausage recipes have been passed down through some families around the world for countless generations, most peoples’ experience with sausage comes in two flavors: links and patties.

Hot dogs are technically a form of sausage, as they are ground meat, fat and salt crammed into a casing, and they’re designed to be homogenous, bland and inoffensive. Most sausage patties hold more flavor than hot dogs, as they are usually mixed with spices like ground black pepper. Sausage patties are usually consumed as a breakfast food.

Sausage comes in a third form common in Central American cuisine: as ground meat without a casing. Chorizo is a Spanish sausage that is sometimes fermented, and will often appear with or without a casing. Unlike hot dogs, chorizo is often spiced very well, presenting with a full-bodied and aromatic flavor.

Andouille, pronounced aan-DOO-ey, is a personal favorite of mine. Used extensively in French and Cajun cuisine, it is primarily meat from the intestine, seasoned with garlic and wine. It has a rich and garlicky flavor that compliments spicy food without becoming overpowering.

Weisswurst, or white sausage from Bavaria, is made using minced veal and pork back — better known as bacon — with hints of onion, lemon, ginger and cardamom. While I haven’t tried weisswurst, the flavors seem as though they would be smoky, balanced by a bit of citrus and earth.

Sausage isn’t just a meatatarian’s game. Vegans have eked out a piece of the sausage market catering to those who are health conscious while still loving the smoky flavor only sausage can deliver. Most processed vegetarian sausage from grocery stores use a mix of wheat gluten, the protein that is extracted from wheat (and something that those of us suffering from Celiac disease are extremely allergic to), or from soy. Neither of these are particularly good for you in large quantities, but alternatives do exist.

The key to creating a good sausage is an abundance of protein and fats. In the plant world, this can be found with a mix of pinto beans, black beans and pecans, while using mushrooms as a filler. Very few manufacturing companies seem ready to invest in mass-producing vegan sausage with these ingredients, but it has been a popular experiment among adventurous vegan home cooks.

I bet you didn’t expect inclusivity in this article.

Stay curious and be kind to one another, 7B.