‘When Marnie Was There’ among upcoming films at Panida

It’s hard to imagine a more bittersweet swan song for Studio Ghibli than “When Marnie Was There.” 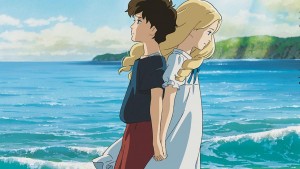 A screenshot from ‘When Marnie Was There.’

Barring a future reopening, “When Marnie Was There” is Ghibli’s final bow. And while it doesn’t quite reach the heights of  “My Neighbor Totoro,” “Princess Mononoke,” “Spirited Away,” “The Tale of Princess Kaguya” and around a dozen other masterworks, it’s still a fitting and affecting capstone to the Ghibli canon.

Directed by Hiromasa Yonebayashi, “When Marnie Was There” centers on Anna Sasaki, a 12-year-old girl suffering from severe asthma and even worse social anxiety. The Japanese countryside proves as uncomfortable as the city for her after her medical ailments force her to visit relatives for the summer. But while investigating a dilapidated mansion on the coastline, Anna meets Marnie, the mysterious blonde-haired girl who has haunted her dreams. The two quickly form a friendship that proves to be built on deeper ties than either of them anticipated.

“When Marnie Was There” is a relatively simple story, and it unfolds slowly over several slice-of-life scenes. But what initially feels like meandering pacing proves to be the groundwork for a wallop of a third act. While the film is a far cry from Studio Ghibli’s most emotionally mature work—that’s probably “Grave of the Fireflies’” heart-rending examination of war’s true cost—it’s a challenging movie that deals with depression, rejection, loneliness and, ultimately, reconciliation. It’s also something of a puzzle. As Anna uncovers more clues about Marnie, a picture begins to take shape of her past and her curious behaviors.

If you know anything about Studio Ghibli, you don’t need me to tell you that the animation is fantastic. True, there’s nothing quite as spectacular here as the gods and demons of “Princess Mononoke” or the spirits of “Spirited Away.” But “When Marnie Was There” demonstrates its visual quality in subtler ways: the children’s expressions, the shimmer of sunlight on water and the vibrant colors of the seaside village. The fluidity of the hand-drawn animation and the elegance of the compositions demands to be seen on the biggest screen possible.

“When Marnie Was There” is appropriate for all ages, but younger children may be impatient with its slower pace and realistic setting. Every other age group should find something to admire here, whether it be its colorful art, the simple beauty of its childhood friendships or the heft of its emotional weight.