The Panida Theater starts off its 2020 theater season with a finalist for the Pulitzer Prize for drama. Love Letters, by playwright A.R. Gurney, takes the stage Thursday, Feb. 13-Saturday, 15 at 7 p.m. and Sunday, Feb. 16 at 3 p.m. at the Panida’s Little Theater. Tickets are $15 each, which includes dessert served at intermission. 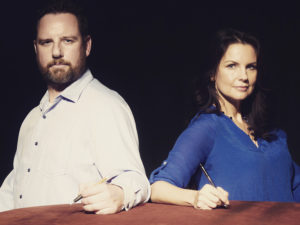 Love Letters is a tragi-comic examination of shared nostalgia, missed opportunities and deep closeness of two lifelong, complicated friends as they read letters to each other spanning more than 50 years in a very intimate setting. Two seasoned actors will fill the lead roles of Melissa Gardner and Andrew Makepeace Ladd II.

Amy Sherman, who plays Melissa, has been busy the past few years with roles in the Panida Theater’s performance of Drinking Habits, Hearthside Stories One Acts, Thanksgiving Next and Thanks a Lot. She has spent a number of years working in the film industry, modeling and recently directed a charity fashion show.

“The author creates a world where the characters’ stories are not tied up with a pretty little bow; but, rather, as often in life, are left without closure,” Sherman said.

“In this play I think the audience can connect to the characters from aspects within their own lives,” Moore said.

Moore has been in many productions in the Sandpoint area since the late ’90s, including Waiting for Godot, The Bad Seed, Christmas Carol, Drinking Habits and Thanksgiving Next.

“This play is unlike any other I’ve been in, in that it creates characters who grow before the audience’s eyes through just the written word,” Moore said.

Unlike most live performances, in which the actors develop a character by deliberate movement on stage with fellow actors, this performance makes use of the vocal talents of the performers.

“Live theater is still an incredibly powerful medium and touches audiences in a unique way,” Walker said. “Although we rarely receive handwritten correspondence anymore, we can still cherish its impact.”

The Panida has partnered with local business Sharon’s Hallmark for a unique Valentine-writing touch.