Where am I taking my humans today?

On this beautiful sunny day, I’m strolling downtown, doing my beat box thing and Mr. and Missus are humming “99 Bottles of Beer on the Wall.”

Just as I finish leaving my calling card at my favorite spot, we mosey into the Chamber’s business of the month, the Idaho Pour Authority, (IPA) located at 203 Cedar. There are over 350 unique bottles of craft beer artfully displayed on the specially designed wall shelves, with twelve rotating craft beer taps, local wine, cider, and non-alcoholic beer available to customers.

Owners Jon Hagadone and Vicki Reich, beer lovers and home brewers for years, wanted to own a store in town where folks could gather to drink good beer, take some home, converse and bring their dogs. 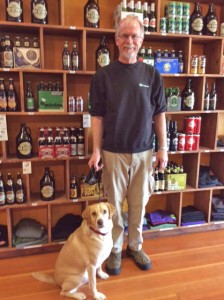 Owner Jon Hagadone “pawses” from his work to pose with Drake.

Jon and Vicki are very much dog people. They miss having a dog in their home, so having the opportunity to share the IPA with other dogs is a tail-waggin’ experience. This is a place where everyone knows your name.

Jon’s parents bought the building in 1946 and opened the original Sandpoint Furniture Company on this block. Jon and his sisters worked at the store while they were growing up, specializing in window washing, dusting, and other furniture related grunt jobs. Since the kids wanted to go to college, his parents sold the business. However, Jon and his sisters still owned the building.  Jon always wanted to return to work in the place where he grew up in. When 203 Cedar became available, he knew this was the perfect place for the IPA.

The renovation began and when the carpet was ripped up, the demolition team exposed the original pre-World War II wood floor. They reclaimed the wood floor, designed and built the custom shelves and interior.

Another piece of barkin’ history is that the original Reader office was located in the back of the building where Jon’s son published the paper. 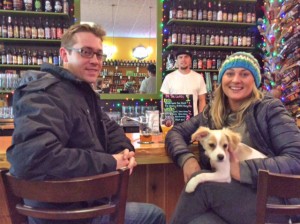 Customers John Grubbs and Lindsay Nance pose with their new pooch Reggie, while Jake Hagadone looks on from behind the bar.

Three months later the dog friendly establishment opened with a menu of dog-gone good beers; Red Hydrant Ale, Garde Dog, Dogtoberfest, K-9 Winter Ale, Hair of the Dog, Cold Nose Winter Ale and many others. I’m still searching for the namesake Drake beer. Stay tuned! For every season there is a beer!

Recently, the Idaho Pour Authority was voted “The Coldest Beer in Town” “Second Best Bartender in Town” and “The Best Bar in Town” by the Bonner County Daily Bee Best of the Best (funny, it’s not a bar, just a store with craft beer, tables, live music, munchies and no kitchen).

Whether you are looking for a mixed six-pack for the weekend, a place to fill your growler or a comfortable place to relax and try some new beers, the Idaho Pour Authority has everything a craft beer lover could want.

Oh, one more thing; paws up to Jon, Vicki and the IPA staff. They have hosted thirty plus benefits for nonprofits in the last two years. Recipients have included Friends of Scotchman Peaks Wilderness, The Idaho Conservation League, the Panida and the Bonner County Food Bank, just to name a few.

2. Do your outside biz before entering.

4. Groove to the music, it soothes the savage beast.