The Sun and Mercury

We’re back, again! In this article, I was planning on covering a subject near and dear to my heart: The planets of our solar system.

I could gush about our solar system for pages, but I don’t want to spend your whole day on a massive dissertation the size of one of these aforementioned planets, so I’ve decided to break this article up into pieces!

We’ll start at the center: The Sun. Though technically not a planet, and most definitely not rocky, it would be improper to discuss anything about the solar system without having mentioned the importance of the Sun. The Sun is a star, and what is a star? It’s essentially a giant factory of hydrogen slamming together for billions of years to create energy and light and gravity. Gravity quite literally makes the world go ‘round, and without it, we’d just be freely floating in a terrible and cold void akin to the inside of a refrigerator with the door closed. You know, just colder. And darker. And way less fun to think about. 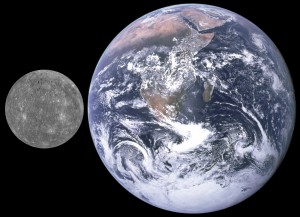 Mercury vs. Earth: the bloodletting.

Interesting facts about the Sun are: All light and energy came, and is coming from the Sun. I’m sure you’ve heard that it takes 8 minutes for light to get from the surface of the Sun to the Earth, but did you know that it takes that same light anywhere from 17,000 to 150,000 years to go from the Sun’s core to its surface? 8 minutes ago, the light bathing the Earth right now left the Sun, but they started their long journey well before humans ever knew what a wheel was.

Did you know the end of The Sun has been theorized, based on observations of other stars? It’s a pretty depressing prospect, but one that most stars must endure. Roughly 5 billion years from now, once the Sun will have used up most of its hydrogen, it will begin a series of events that will ultimately lead to some very interesting landmarks. It will grow to over two hundred times its current size, becoming what is called a Red Giant. To give you perspective on how large that is, if the planets don’t move, it will completely engulf Earth, and reach out to double what Earth’s orbit is today. The Sun is a little guy, and doesn’t have the mass required to go Supernova and start the whole process over again, so he’ll essentially throw most of his mass out into space and shrink up into what we call a White Dwarf, a small, bright star that will burn for trillions (That’s not a typo. Trillions.) of years before essentially turning into a giant diamond.

The first actual planet in our solar system is Mercury, a barren world with close to the sun, and because of this, has all sorts of problems. Due to its proximity, it has an unusual orbit, speeding up as it draws closer to the sun and slowing down as it moves away. Because of this, a year on Mercury is much, much shorter than a year on Earth. Also because of its unhealthy clingyness

to our parent star, it appears that most of its atmosphere has been stripped away, leaving its rocky surface to bake like a stony casserole that got left in the oven for too long.

You’d think that, being so very close to a burning orb of searing hot plasma, the entire planet of Mercury would be cooked through and through, right?

Actually, it’s not. It’s only ever hot on the side facing the sun. The side facing away, into the cold void of space, can hover around a chilly 280 degrees Fahrenheit. This happens because there is no atmosphere of any kind to insulate the planet; poor, clingy Mercury is left to fend for itself at the mercy of of the universe.