This is the third installment of an ongoing series exploring the origins of where we got some of our placenames from. Last week, we covered Sagle, Schweitzer, Colburn, Selle, Hope and Oden. This week, more local history brought back to life. 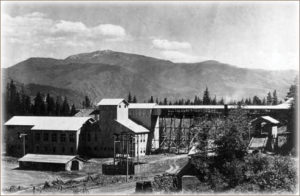 The Talache Silver Mill in its heyday. You can still see remnants of the works to this day. Photo courtesy Bonner Co. Historical Society.

There’s some question as to the origins of the name Newport. My research showed it was named as such in 1890 because it was the “new port” after Albeni Poirer established a trading post and steamship port on the Pend Oreille River. The steamboats ferried settlers in the Pend Oreille Valley. Present-day Newport is actually the second town of that name, the first located at the current site of Oldtown across the Pend Oreille River. Old Newport (on the Idaho side of the river) eventually dwindled and was renamed Oldtown in 1947. Albeni Falls Dam was, of course, named for Albeni Poirer.

One alternate theory that local historian Nancy Foster Renk suggested was that a man named Mike Kelly opened a store and post office with the name of Newport, Idaho. According to Renk, the completion of the Great Northern Railroad in 1892 brought more business but when the depot burned, Great Northern built the new depot across the river, leading to the growth of the town on the Washington side. The original town (Oldtown) dwindled over the years after the move across the river.

The name of this majestic peak wasn’t named after a Scot. Local writer Sandy Compton shared a story about his grandmother Mariam Clayton showing him the eastern profile of the peak, which resembled a “craggy-faced man laying on his back” with a ruffle at his neck like an old-fashioned Scot might wear. But Sandy has been known to spin a yarn or two, so this story may change after a few beers.

The Pend Oreille Review ran a story on Nov. 30, 1917 headlined, “Village of Talache springs into existence.” According to the article, what started with a single miner’s cabin beside the lake grew into Henry H. Armstead’s mining camp. Prior to the name “Talache” the settlement was referred to as “Blacktail.” It boasted a population of 125 people, a company store, a post office and seven cottages to be used by “married employees.” Over 100 of the village’s inhabitants were employed at the Talache Mine, amounting to a payroll of $15,000 a month. The article stated, “The postoffice, heretofore known as Blacktail, has been changed and will hereafter be called Talache, which being interpreted means ‘miner’s pick.’ Armstead was a New York mining engineer who purchased the mine in March 1917. Prior to Armstead’s purchase, the mines were known as the “Keystone mines of Blacktail.” The mine shaft can still be seen at present-day Talache beside the shores of Lake Pend Oreille.

Denton Slough, just east of Beyond Hope, is a shallow waterway that supports many submerged plant life and wildlife, including a colony of more than 30 nests of Western Grebes. Local historian Chuck Peterson once told Nancy Foster Renk — another local historian — that Denton Slough was named for Dennis Thornton, an early resident in the area east of Hope. The rural school across from old Highway 200 west of the Sam Owen Fire Station was a small log cabin known as the Thornton School. An old newspaper archive from 1901 refers to Dennis Thornton as a “timber cruiser” for the “past two months” before leaving for their homes in Wisconsin.

In James Carl Dahl’s publication “Bonner County Placenames,” Dahl wrote that a station named Thornton (Dahl spelled it “Thorton”) was established in 1891 when a Northern Pacific Railway siding was constructed. The station was later moved, and the name “Denton” was used. Denton was a combination of “DENnis and thornTON.”

I would be remiss if I didn’t cover the strange naming of our state. Several different theories have been introduced as to the origins of this word, but the truth is somewhat shrouded in mystery. The naming of the state can be traced back to a white man from Philadelphia named George Willing. He once fraudulently won an election as a delegate from the territory that later became Colorado (the results were never certified and he never officially took office). But, Willing first introduced that his territory should be named “Idaho,” an idea that found its way to the U.S. Senate in 1860. Willing claimed Idaho was derived from a Shoshone term meaning, “The sun comes from the mountains,” or “gem of the mountains.” Boise historian Elizabeth Jacox said it was shortly before the name was ratified, lawmakers discovered it was a fraud.

“At the very last minute, Idaho was pulled from the bill and it became ‘Colorado Territory’ instead,” Jacox said. But the name stuck. Locals in the Colorado Territory named a community “Idaho Springs.” Also, a county called “Idaho County” was created in the eastern Washington Territory. The county was supposedly named after a steamship named Idaho, which was launched on the Columbia River in 1860. It’s unclear which came first, the steamship or Willing’s sham of a name. But it persisted. When the Idaho Territory broke off from the Washington Territory a few years later, elected officials embraced the name, forgetting that it wasn’t a Native American term. It didn’t have any meaning at all, actually. That didn’t stop many textbooks well into the 20th century erroneously attributing the name “Idaho” from a Shoshone term “ee-da-how.” So, if you were to say our state was named after a hoax, you wouldn’t be wrong.

The origins of the name of this small town south of Sandpoint are somewhat unclear. One source states that it is a Salish word meaning “very cold,” while another states it is an English derivation of a Coeur d’Alene Salish word meaning “deep water.” It is known that the Kalispel Tribe used Cocolalla Lake, carrying their boats overland from Sandpoint to fish.

Special thanks to local historians like Nancy Foster Renk and Bob Gunter, whose work I have checked to verify my conclusions. Also, very special thanks to the Bonner Co. Historical Society and Museum for keeping history alive.