They say that it takes a village, and it’s true. And, when that village has a generous benefactor good things can happen even in the smallest rural communities. With thanks to a grant from LOR Foundation, Music Conservatory of Sandpoint expanded its Music Matters! program into Kootenai Elementary School, marking its fourth community location during the after school hours. 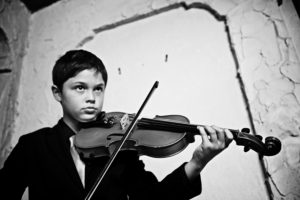 To celebrate the expansion MCS will present over 80 musically-minded youth who will show off their newly-acquired skills at two performances at the Panida Theater. Nearly 500 LPOSD students will attend this capstone Children Performing for Children Concert including 140 peers from Kootenai Elementary, who will explore the life of Tchaikovsky and his music.

MCS Board President Kathi Samuels said that they expect record attendance. This is a district-wide and community event. Students from Sagle, Washington, Hope, Northside and, of course, Kootenai Elementary will enjoy a 10 a.m. concert at the Panida on Tuesday, April 24. Then there will be an encore performance for the community at 6 p.m. Doors open at 5 p.m., and $5 tickets will be available at the door.

“We are excited to celebrate the expansion of the program to two afternoons in Kootenai,” Samuels said. “In a rural community where transportation can be limited, we want to recognize LPOSD for welcoming more music in the schools during the after school hours, and their role in exposing more kids to music.”

This after-school initiative teaches children the basic principles of music theory while they develop their talent for playing an orchestral instrument or increase their singing skills with a children’s choir. This El Sistema registered program that started in 2014 has already served over 500 students in the Sandpoint area.

“Students may participate from anywhere in our region, whether public, private or homeschooled. We’ve even had kids drive in from Priest River to participate,” Samuels said.

“Music Matters! focuses on skill building and continuous (weekly) instruction, whether a student has previously held an instrument or participated in a vocal group or not,” Samuels said.

She also said that many students are able to participate because MCS has a free instrument loan program for students who don’t already have them. And Samuels said that she and the instructors at MCS are looking forward to the continuation of Music Matters! with the MCS summer camp line up, which is now in its sixth year.

“More details will be coming soon about that too,” she said.

For more information about any of the Music Conservatory of Sandpoint’s classes, you can go to their website at www.sandpointconservatory.org or call the office 208-265-4444.