Bring on the mid-week dance party

A handful of nationally-touring bands will make their way into Farmin Park this summer to perform free, family-friendly shows, and if that sounds too good to be true, that’s because it’s the brainchild of Mattox Farm Productions. 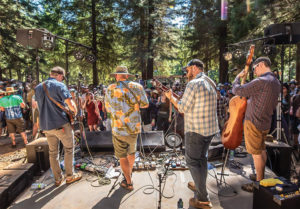 The Washington Trust Bank Sandpoint Summer Series will consist of three shows over the coming months, and is the latest effort by Mattox Farm founders Robb and Tasha Talbott to bring foot-tapping, story-rich and occasionally fiddle-ripping Americana to North Idaho.

The first show in the series, set for June 19, will feature PNW “jamgrass” outfit Cascade Crescendo, which visited Sandpoint in 2017 and 2018 as part of previous Mattox Farm shows.

“We’re always giddy when we see a Mattox Farm show on our calendar,” said Harrison Olk, banjo player and vocalist for the band. “We always look forward to coming back.”

Olk said such easily accessible shows benefit both those in the community and the artists performing on stage.

“As a band who is mainly playing venues, we may not always get to perform for younger or older audiences,” he said. “However, free, family-friendly shows provide us a conduit to that crowd.”

“There’s always a great energy playing outside under the sun and sharing that moment with an attentive crowd,” he said.

Seating at the June 19 show in Farmin Park will be available at 6 p.m. and the music will start at 6:30 p.m. Summer Series shows are kid-friendly, but dogs will not be allowed. All the shows are free to attend, including a July 17 performance from soulful R&B artist Lilla and an Aug. 21 show with blues-rock artists Jocelyn and Chris Arndt — the touring musicians who round out the series, showcasing Mattox Farm’s desire to bring something for everyone to Sandpoint.

The shows are all free thanks to several local sponsors, including the Pend Oreille Arts Council, KPND, Kochava, La Quinta, the Reader, Sandpoint Curry, the City of Sandpoint, Upside Kombucha and Eichardt’s.

The lead sponsor is Washington Trust Bank, which Robb Talbott said is largely thanks to Sandpoint branch manager Nate Rench. Rench said the Summer Series is a chance to bring families out for not only great music, but everything else Sandpoint — his hometown — has to offer.

“Washington Trust Bank truly wants to see the communities that it serves to be thriving,” Rench said. “For me personally, I feel both lucky and honored that the place I work wants to bring good things to this community since this community has been so good to me. It makes me proud to go to work everyday.”

For more information on the Washington Trust Bank Sandpoint Summer Series or to contact the Talbotts, visit www.mattoxfarm.com.