A former educator and principal of Sandpoint High School from 1992-2001, A.C. Woolnough is well-versed with the written word as a powerful form of expression. When he was diagnosed with Parkinson’s Disease in 2015, Woolnough again turned to the English language to cope with the diagnosis, as well as to share what it’s like to live with the disease.

Shortly after his diagnosis, Woolnough began writing a monthly column for the now-defunct River Journal titled “All Shook Up.”

After the River Journal went out of publication, Woolnough contacted the Reader and asked if there was any interest to continue the monthly effort. Woolnough’s column “Shake, Rattle and Roll” has appeared monthly in the Reader since 2017.

“This column is to not be in denial,” Woolnough said. “If I’m writing about stuff happening to me, or people I know, it keeps it real. There are times I’ll go five or ten minutes without noticing any tremor and I’ll think, ‘What if they’re wrong?’ But it’s always there.”

Earlier this year, Woolnough compiled more than 40 columns he’d written about Parkinson’s into a book called “One Fire: Reflections on a Journey Through Life with Parkinson’s Disease.”

As noted neurologist Dr. David Sulzer wrote on the back cover, “His essays, suffused with humor and bravery, will be a source of inspiration, education, realism and hope for the increasing number of affected patients and families, and will inspire you to become involved in the quest to eradicate this disease.”

One of the biggest drives for Woolnough is to educate people about Parkinson’s who may not have had any exposure to it before.

“I want to let people know it’s not a death sentence,” he said. “It can be ugly, but it has its own rewards.”

One such bright side is Woolnough’s efforts to become involved with the research to eradicate Parkinson’s.

“Every three years, there’s something called the World Parkinson Congress for people with PD, care partners, clinicians, researchers, therapists and family members,” Woolnough said. “It’s the only time and place where the entire community comes together.” 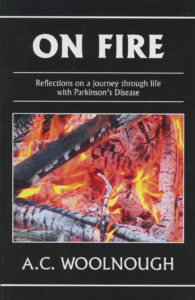 Intrigued by the positive step forward the Congress showed, Woolnough applied to be an ambassador and was accepted.

“For the last three years I’ve traveled around the country meeting people, speaking at support groups, at conferences, on the internet,” he said. “From being an ambassador, I was asked to be on the faculty, as they call it.”

Woolnough was invited to travel to Kyoto, Japan for this year’s conference, which just concluded. At the Congress, Woolnough emceed and moderated a roundtable discussion titled “Planet Researcher versus Planet Patient: How Can we Better Communicate and Collaborate.”

I won’t go into specifics about the conference since Woolnough will most likely write about it in his column, but suffice it to say it’s a great honor.

Woolnough said his greatest reward with the columns – and now the book – is impacting others’ lives.

“I love the fact that one researcher bought 11 copies of the book,” Woolnough said. “One for himself and the others for each person in his lab.”

Woolnough said he is honored to participate in research, mainly because he feels he can provide an actual “on the ground” assessment of what Parkinson’s patients go through on a daily basis.

“Some researchers have never even met something with PD,” Woolnough said. “I’ll listen to scientists and tell them about quality of life issues. Like my wife will be wearing a new perfume, and I won’t be able to smell it. Unless I see the curds, I don’t know if milk has gone bad. I can’t tell the difference between Coke and Dr. Pepper. The scientists then say, ‘Oh. I understand.’”

“On Fire” is for sale at Vanderford’s and The Corner Book Store in Sandpoint, or you may contact Woolnough directly at [email protected]