What kind of commenter are you? Part 2

We’re back with another look at the commenting styles of people on Facebook. 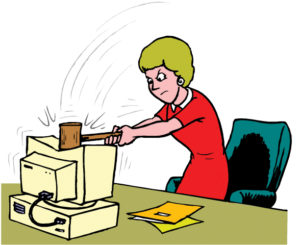 Which category do you fall under?

This person usually reads just the headline of a linked article and immediately weighs in with a dumb comment that most of us deduce comes from someone who hasn’t read the article and knows very little about the topic. Ignore them or challenge them with a detailed point not covered in the headline or first paragraph.

Some commenters have a sole purpose, it seems: to point out misspellings and grammar mistakes from others. While I believe using proper grammar and spelling words correctly are important in any form of writing, if your sole reason for commenting is to point out someone else’s typing mistake, you shouldn’t post at all.

THE ALL CAPS GUY

I have nothing to say about this dude, other than to point out that nobody under 75 types in all caps anymore. NOBODY! Calm down and drink some Metamucil. Maybe add a dram or three of bourbon.

I bow down to the witty commenter who avoids politics, ideological battles, religion and other touchy topics — choosing instead to craft a funny response that doesn’t anger anyone except the trolls who want the world to burn. It ain’t easy being funny, so hats off to you, humorists. We need you now more than ever.

Some commenters always bring it back to their personal bugaboo. Write a post about the food bank fundraiser, they’ll somehow connect it to goose poop. Write a moving post about a family donating firewood to veterans? Goose poop. A touring band is coming to town? You guessed it: goose poop. One-trackers: It’s not that your subject matter is inappropriate. More often than not it’s a timely, important topic. But that doesn’t mean you have to populate every post with your particular issue. Pick your lanes, friends.

Everyone is dumber than me

You’ve seen this commenter before. They react to issues of the day with disdain for their fellow man, sometimes angrily insinuating that everyone falls below them on the IQ scale. The ironic thing is, these commenters — while being quite mean — are sometimes correct: most people are quite dumb on social media. You’ve heard the adage that “the camera adds 10 pounds.” Well, social media subtracts about 30 IQ points, and that’s on a good day.

We don’t hesitate to block someone from our Facebook page if they cross the line. But, occasionally, a commenter will not only cross the line, they’ll run right over it. This happened a few months ago when one commenter made references that a certain group of people “will be rounded up and made to pay for their crimes against this country,” among other incendiary statements. We not only block users that use threats, we report them to the police.

The social media unicorn. Rational commenters don’t resort to emotional pleas or name calling, but argue their points in a logical, sane manner. They take pains to avoid calling out others, but instead, embody the idea that reasonable people can still disagree without being disagreeable. If you fall under any of the other categories, please strive to be one of the rare beasts. They add so much to the conversation.

Which category are you? Which do you want to be? Are you helping or hurting? You’re in charge of those fingers, bub.