Shoe-thieving cat shows the neighborhood who is really in charge

Wentworth the cat burglar is at it again.

Two years ago, the Reader published a story about an unassuming cat named Wentworth who was notorious in south Sandpoint for stealing flip-flops from neighbors’ porches. Perhaps the newfound publicity briefly slowed down his brazen thievery or maybe it was the ongoing pandemic, but there’s no doubt about it: After a brief hiatus, Wentworth has again turned to a life of crime. 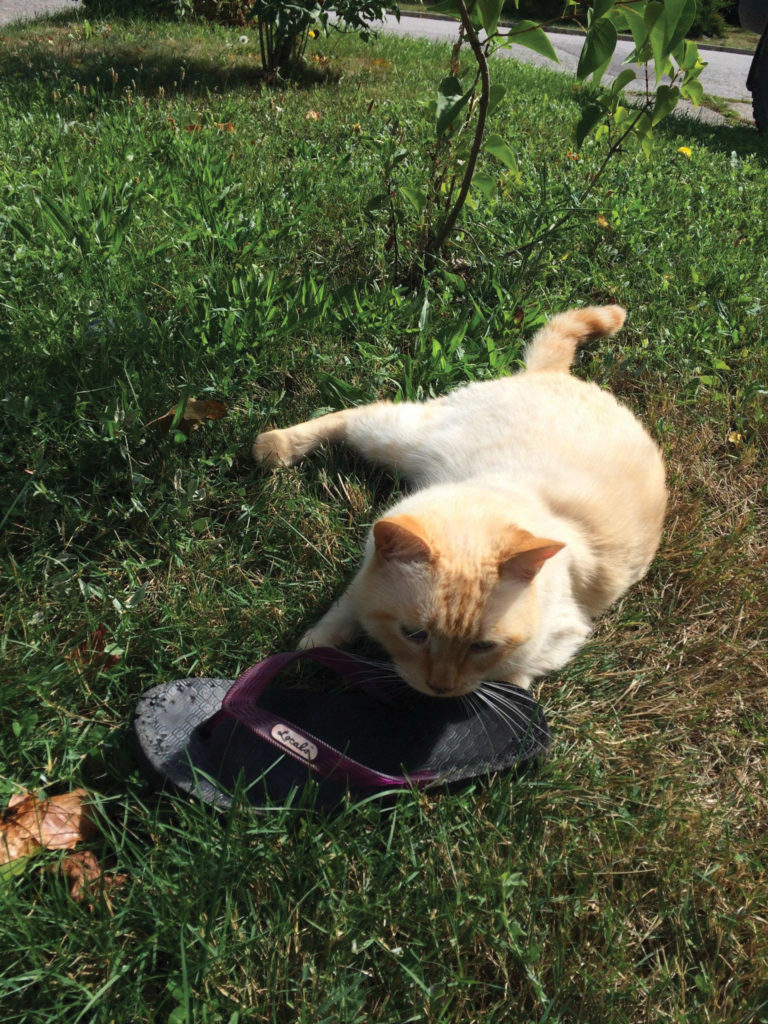 Wentworth posing with one of his latest ill-gotten acquisitions. Courtesy photo.

Owned by Amber Spinney in south Sandpoint, Wentworth has left a lasting impression on the neighborhood at large, striking fear in the heart of anyone bold enough to leave their flip-flops outside unattended.

“After the article came out, the number of stolen flip-flops definitely went down,” Spinney told the Reader. “People became more aware. I had a bag of shoes and went to all my neighbors in the direct vicinity and returned what I could. I feel like this summer he’s been frustrated because there’s just not as many to steal. But I did just find a hot pink and black soccer cleat, brand new. First day of soccer and Wentworth went ahead and stole it and left it on my front stoop.”

Sporting soft orange fur and a mischievous twinkle in his eye, Wentworth first comes across as just another neighborhood cat until he spies a pair of sandals he fancies. That’s when he goes covert, sneaking up to front porches and making away with one of the shoes, hauling it back to his headquarters and depositing it in front of the cat door as tribute to his owner. He pulls off his heist in the middle of the night or in the middle of the day — it makes no difference to this criminal kitty.

“He’s just so proud of himself,” Spinney said. “He drops it, whatever he stole, and chirps at me. He’s a really loyal cat and a good hunter. He just wanted to bring me something. I’m always asking him, ‘Why do you do this to me?’”

The shoe burglaries became so prevalent a couple years ago, Spinney even placed a chair permanently outside of her home with a sign reading, “Are you missing a shoe?” with a rotating stock of mismatched sandals always on display.

“He is a naughty kitty,” Spinney said. “One time, a neighbor said he went inside for just a moment and came back outside and, in a matter of minutes, Wentworth took his shoes.”

Amber said Wentworth is particularly fond of flip-flops, especially Hawaiian brands like Locals, but he has been known to take tennis shoes, slides, boots and even socks.

Neighbors Linda and Steve Navarre told the Reader about a recent run-in they had with the notorious thief.

“We had a young man who was staying here for a couple months,” Linda told the Reader. “He had two sets of slides sitting out on the porch and the cat took one of each of them. It was the beginning of the Festival and he thought some kids were fooling around and stole them off the porch, so I went down the street and sure enough, one was sitting in front of the cat door at Amber’s place. We never did find the other one.”

Linda, who lives a few houses down from Amber and Wentworth, said most people in the neighborhood are aware of the cat’s antics, but Wentworth still manages to obtain plunder on a semi-regular basis despite neighbors keeping their flip-flops under lock and key.

“A couple years ago, Steve was building his garage and I said, ‘Oh boy, I see a shoe down the street, I bet the cat is at it again,’” Linda said. “I went down the street and said, ‘Oh my gosh, that’s mine!’”

Linda knew Wentworth was at it again this summer when she left a pair of athletic shoes sitting on her back porch with socks balled up inside.

“I looked out in the morning and one was out in the middle of the patio,” she said. “I looked further and could only find one of those sport socks. I never found the other one.” 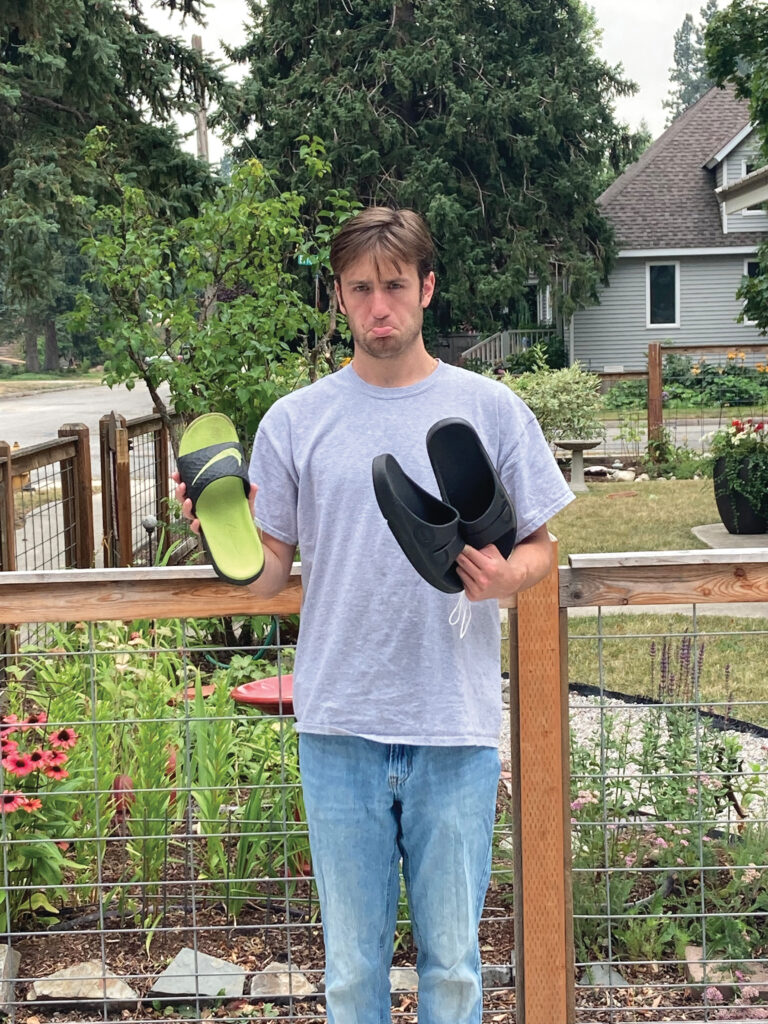 A recent guest of neighbors Steve and Linda Navarre poses with his missing sandal. Courtesy photos.

Linda said when new neighbors moved in next door, they mentioned their flip-flops kept going missing from the front porch, “but they found out what was going on,” when they saw the chair with the contraband sandals sitting outside of Amber’s place.

“I think that everybody knows about him now,” Linda said. “It’s so funny. There was a house across the street from us that has an L-shaped porch, so the shoes weren’t even visible from the street. He had to get up close and personal to steal their shoes. Which he did.”

Spinney has grown to accept her fate harboring a known criminal like Wentworth, regularly gathering up the many mismatched sandals and walking around the neighborhood to ask if anyone is missing their shoes.

There have been efforts to curtail the thefts, such as one neighbor who tied dental floss to a cheap pair of flip-flops and hung the other end through his window, tied to his finger to wake him up, but Wentworth was too smart for him. He left the flip-flops alone and made off with a nearby sneaker instead.

Spinney said in the absence of his usual stock of flip-flops, Wentworth has broadened his criteria.

“He’s been bringing lots of feathers home recently,” Spinney said. “Big black crow feathers. And lots of bats. This spring, he brought in eight in just a week.”

Spinney said Wentworth doesn’t kill bats which he brings in – after all, what would be the fun in that? Instead he plays with the flying mammal with his brother and waits for his owner to scream and chase the bat around the house before shooing it outside.

“It’s a game that he and his brother Rico play, watching it fly around and both doing backflips to catch it,” she said. “One time I walked out of my room and three feet in front of me, hanging from the guest room door, was a live bat. Your heart starts pumping and you think, ‘This thing is going to jump on your face.’ I’ve developed a pretty good catch and release system to getting the bats outside again – I turn the lights off and turn a light on outside and use a broom to gently persuade it.”

Spinney said one of the best parts about having such a bad kitty is having good neighbors to deal with his bad habits.

“When the article first came out, everyone thought it was a hoot,” she said. “I mean, what are you gonna do? It’s not like a dog barking in the yard. I can’t fence my cat in. I don’t know what to do. I’m really lucky that they are so understanding. Now people just come to my yard if they’re missing a shoe, or call me and ask if I have their sandal in the yard. Everyone has been really cool about it and so understanding. I’m fortunate to live in an area where nobody has gotten mad.”

Wentworth’s first preference will always be stealing neighbors’ footwear, but he has shown there are limits to what he’ll steal.

“I have some neighbors, they are SHS track coaches, and they run a lot,” Spinney said. “They had a pair of stinky shoes that they left outside. Wentworth goes over, but he will not touch her stinky shoes. Which I think is so funny. He does have some limits. He’s not super desperate.” 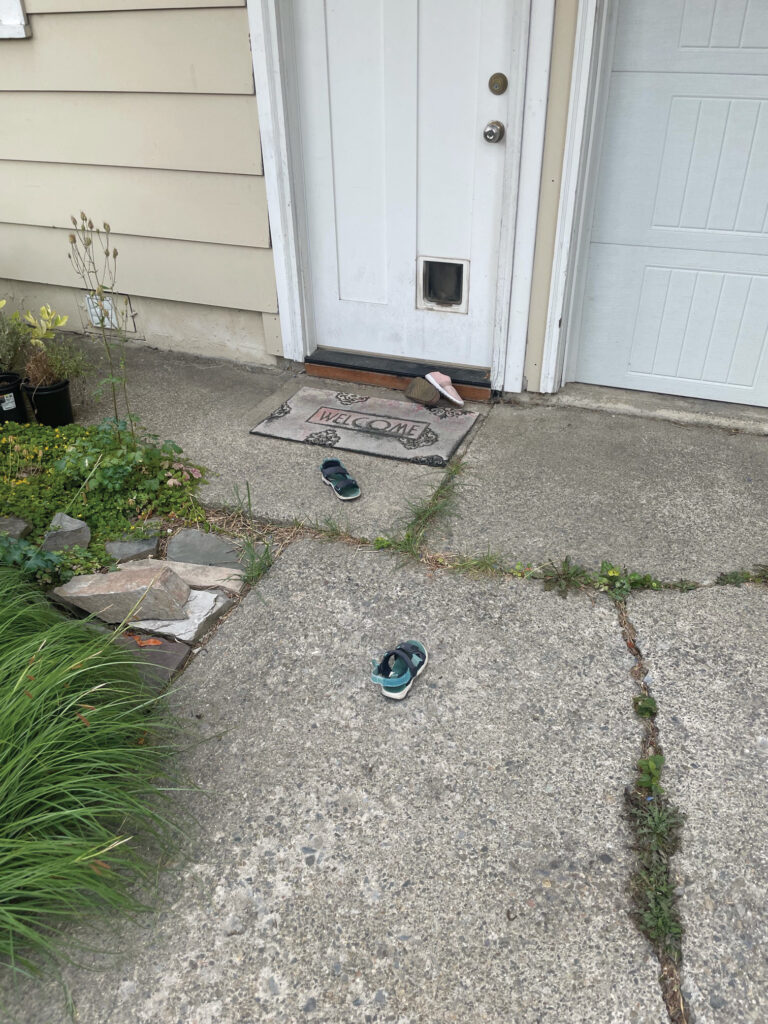 Mismatched sandals are often strewn about outside the door at Wentworth’s house. Photo by Duffy Mahoney.