For the past seven summers, the Music Conservatory of Sandpoint has invited students from different countries to create a collaborative youth orchestra featuring talented students from around the globe. Be it students from El Sistema, Mexico; Europe; or cities across the United States, local children are provided the opportunity to connect and learn from one another using the performing arts as the common vehicle. 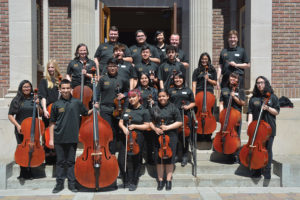 Expanding this year, MCS will be hosting seven string students from nearby Yakima, Wash.; a clarinetist from Germany; and guest Director Roberta Botelli, from the Spokane Youth Philharmonic. All of these gifted young musicians are part of the school’s MCS Without Borders initiative, which exists to establish music as a universal language — regardless of geographical or neighboring borders.

Similar to how players in an orchestra come together to play a unified melody, MCS is excited to continue its tradition of sharing music across borders and across communities.

Our largest group of young players is joining us from Yakima Music en Accíon, better known as YAMA. Their after-school orchestras consist of more than 90 third- through 12th-graders from 19 different schools in the Yakima School District. Most of these children rehearse five days a week for two hours a day as part of an El Sistema school outreach.

Both the Music Conservatory of Sandpoint and YAMA are members of El Sistema USA, a network of musical entities in which participants work to create opportunities for every child to gain access to music through ensemble training and regular public performances. Nationwide, these groups are created to promote positive youth development and encourage thriving communities through the common language of music.

For the second year in a row, the MCS summer orchestra has also hosted European students, and this year is no different. In less than a week, MCS will welcome 15-year-old Lea Stark, a clarinetist from the age of 8, from Regensburg, Germany.

At the helm of this diverse young orchestra is guest conductor, Roberta Bottelli, from the Spokane Youth Symphony. Bottelli is well respected across the Northwest as a cellist, arts administrator and teacher. She teaches cello and chamber music at Whitworth University and often adjudicates for the Washington State Music Educators’ Association, coaching and critiquing cellists, chamber music groups, and high school and middle school orchestras.

Speaking of diverse languages coming together, the theme of this year’s orchestra camp is literary, and will be bringing together a collection of classical songs from the stories we all love — including a featured piece from the beloved tale of Harry Potter.

If you’d like to hear these globally minded students perform together, MCS invites the community to attend its annual summer orchestra matinee on Friday, Aug. 2 at 2 p.m. at the historic Panida Theater. This concert is open to the public and family friendly. Visit sandpointconservatory.org or call 208-265-4444 for more info.

Kathi Samuels currently chairs the board at MCS and is an avid supporter of expanding arts opportunities in Sandpoint.