Of all the words to describe the 2021 Festival at Sandpoint, “transition” seems to be the most appropriate. Between the global pandemic, a major change from natural grass to artificial turf at Memorial Field and fending off multiple lawsuits regarding their no-weapons policy at concerts, Festival organizers had to clear a lot of hurdles this season.

“We had so many challenges this season,” Executive Director Ali Baranski told the Reader. “There was the artificial turf, the pandemic, turnover of volunteers and staff — but overall, the amount of frontloading that happened, [Production Manager] Paul [Gunter’s] preparedness and the overall production went really smooth.”

Baranski said a lot of people were wary of the artificial turf experience, but she was pleasantly surprised by the overall reaction from the crowds. 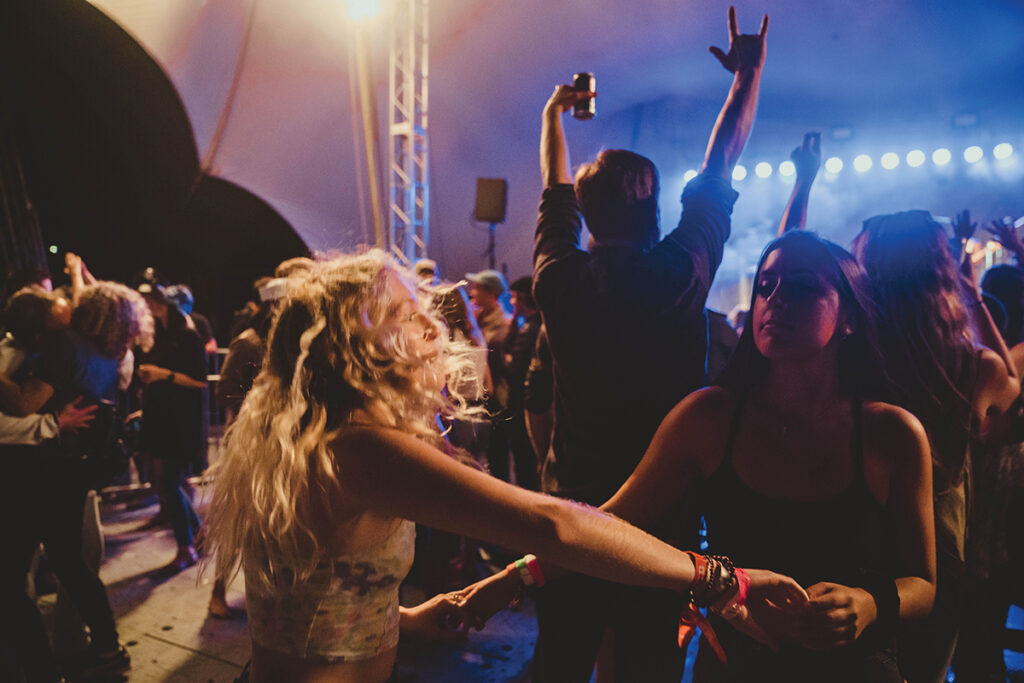 Dancers at the 2021 Festival at Sandpoint. Photo by Racheal Baker.

“Most didn’t notice it, actually,” she said. “At some points, it was super helpful. When we had a lot of rain, it all drained quickly.”

With the turf, however, came extra expenses, which have significantly affected the Festival’s overhead.

“We had to add two days at the front of our lease and two days at the end for setup and tear down,” she said. “We did get a lot of volunteers to help. The Sandpoint High School football team helped set up the decking. But overall, to stay at Memorial Field probably cost us around $150,000 extra annually with the new turf.”

With such a big financial hit, Baranski said they had to change their budget to make up for the added costs, which also adds some complexity when negotiating with artists because they often share overhead estimates when determining pay.

“In comparison to other venues I’ve spoken with, our operations are much higher than others from a competitive standpoint,” Baranski said.

Another turf-related adaptation this year was the use of bike racks to denote aisles between seating sections.

“We changed our security plan in partnership with the chief of police and we were trying to distinguish aisles to leave room for emergency exits,” she said. “Unfortunately it caused funnelling of people into certain areas. Over the course of the two weeks we changed things to close off some of where the funnelling occurred. It created some issues and it created a different ambiance as well. It’s not ideal, but at the end of the day it did work.”

Baranski added that, “One of our biggest challenges was the mobile ordering. That was definitely a pandemic precaution.”

Baranski said she’s not certain if the mobile ordering app will be used next year because it’s hard to tell what the pandemic will be doing at that point, but she’s appreciative that it went off as well as it did.

“It was a bit harder and more work than we anticipated,” she said. “We were lucky to have someone like Justin Landis and his IT volunteers to help people navigate it.”

“We’re staying with that earlier time for smoke and temperature,” she said. “However, we’ve become aware that we should have other backup plans or at least be looking [at other venues]. We wouldn’t move unless it made sense and that it was an improvement, but it is something we have to start to consider.

“In conversations with donors and sponsors, that’s a million dollars we’ll spend on protecting artificial turf in less than 10 years,” Baranski added. “We’re a nonprofit and that’s a hard line item to have in our budget, because we think of what else we could do [with those funds] to fulfill our mission for music education in our community.”

With her first Festival behind her as executive director, Baranksi said she couldn’t have made it through this transition year without the support of her staff and volunteers.

“I’m extremely proud — of not only myself, but this team,” she said. “We were a small team, a skeleton crew that was able to put on something for that many people and did it successfully.”

The Festival at Sandpoint will host a rummage sale from 8 a.m.-1 p.m. on Saturday, Sept. 18 at its office, 525 Pine St. in Sandpoint. They’ll have cassette tapes, CDs, lineup posters signed by many artists, historic Festival items, lots of glassware, mimosas and music.