When Diane Newcomer begins a new “Meet the Neighbors” presentation, she begins by introducing Benny.

Benny is a rubber brown bat meant to replicate the size of an actual brown bat. Benny is her “little friend,” Newcomer says, and she proceeds to pass him around so that program participants can have a closer look. She then proceeds to pass around a plastic bottle cap, weighing about three grams.

“And this is what Benny would weigh if he were real,” she tells them. 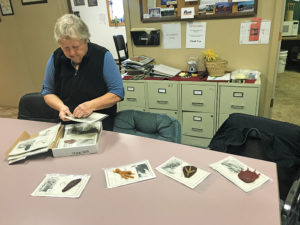 AHWF volunteer Diane Newcomer lays out replicas of animal tracks for students to explore at PSNI on Oct. 13.

One program participant on Friday, Oct. 13, at Panhandle Special Needs Inc. held the rubber bat in one hand and the bottle cap in the other, processing Newcomer’s information about the bat’s real weight. Her eyes widened with the epiphany and a “whoa” escaped her mouth. She told Newcomer she couldn’t wait to tell her mom about Benny.

Newcomer’s “Meet the Neighbors” program is part of the American Heritage Wildlife Foundation’s efforts to educate people in North Idaho about the animals they share the region with. On Friday, she visited PSNI to share her program with Priest River High School’s special needs students.

Activities for the program include studying replicas of animal tracks, animal identification bingo, crafts to demonstrate the food chain, rubbing animal tracks onto paper with crayons, a bird pinwheel craft and much, much more, Newcomer said.

“I thought generally people would be more interested in the crafty things, but what I’m finding is people really just want to talk about animals, which is fine, too,” Newcomer said.

“Meet the Neighbors” is made possible by a grant from the Community Assistance League of Sandpoint. Newcomer said she has always been an animal person, and she wrote the grant with a program in mind that would work for all ages. She ran the program at Alpine Vista, an assisted living community in Sandpoint, and soon, she said, she’ll be trying out the program on a group of preschoolers.

“Wild animals are every bit as interesting as the domestic ones,” Newcomer said. “And because they mean so much to me, I like to share that with people.” 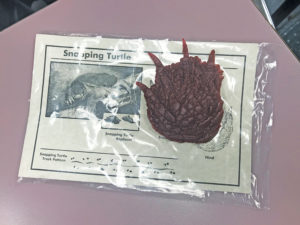 A cast of a snapping turtle’s footprint on display at PSNI. Photos by Lyndsie Kiebert.

In the end, Newcomer said she hopes she leaves people with a sense of wonderment surrounding the wildlife that exist right outside their backdoors.

“The kids from PSNI will go home and talk about animals, and the seniors were talking about the animals when I left,” she said. “I hope people think a little more about the wildlife we share the area with here in Idaho.”

If you have a group in mind that you’d like Newcomer to share her program with, call her at 208-266-1336, or contact AHWF founder and president Kathleen St. Clair-McGee at 208-266-1488. Newcomer said the ideal size for a group is under 20 participants, but she’s open to hearing everyone’s requests, regardless of group size.