‘We have met the enemy and he is us’

North Idaho needs to be honest about its terrorism problem

Remember back in June 2020 when armed militia-types patrolled our downtown to protect us from “vans of Antifa” that were coming from out of the area to burn down Sandpoint? Remember that they were doing so because of cocked up fears of the same happening in Coeur d’Alene? Remember how sure they were that there were terrorists infiltrating our communities, and they were the ones to save us? 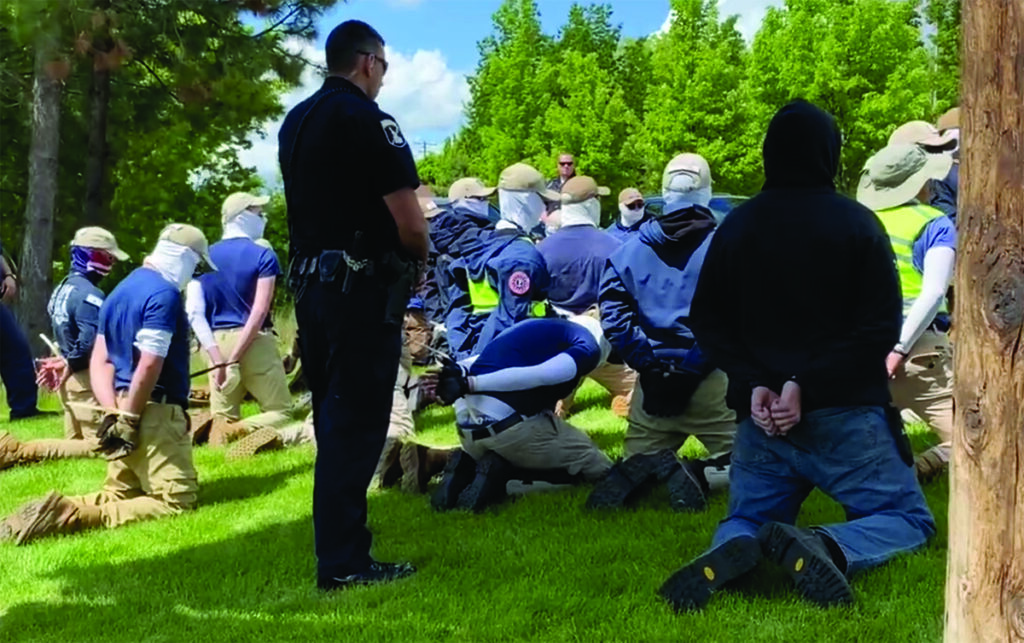 Well, even our “constitutional sheriff” said there was no threat of “outside agitators” from Antifa. The real “outside agitators” were the ones who took over downtown and strutted around with their weapons — claiming to be a defensive force, but really just filling downtown with intimidation.

No one can tell me otherwise; I was there, getting harassed as I tried to turn the corner on First Avenue and Main Street. A couple in a truck saw me walking by, pulled over and started to yell at me that I was a lying journalist. When a 20-something from who-knows-where, armed with a bipod-equipped long gun, sidled up behind me while I was being berated, that changed the tenor of the interaction.

Sandpoint Police Chief Corey Coon said at a community forum a few days later that the armed occupiers’ “intentions are all great,” and that “there is no ill will or intention with those guys.” I beg to differ. There was more “ill will” on display than I ever care to encounter again.

Of course, I did just see it again, albeit in an even more sinister form, when 31 members of the so-called “Patriot Front” were arrested in Coeur d’Alene on June 11 before they could commit a riot against the Pride in the Park event.

Watching the coverage over the weekend with mounting horror, it was not lost on me that there was — literally — a truckload of “outside agitators” attempting to infiltrate one of our communities with the intent to do harm. This was the threat that the armed occupiers in summer 2020 were supposedly there to protect us from. But where were they on June 11, 2022?

Well, they were there, many of them armed and gathered at the outskirts of Pride in the Park for what has become an annual event called “Gun-d’Alene” — a direct reference to and celebration of that time they took over downtown Coeur d’Alene two years ago to save it from nonexistent truckloads of “outside agitators.”

Meanwhile, as the Gun-d’Alene-ists were making their presence known at the periphery of Pride in the Park — with some members of the group making it clear their intention to “confront” and counter-protest the Pride event, according to KXLY — not far away there was an actual truckload of 31 right-wing extremists drawn from at least a dozen states being arrested before they could riot.

That’s not irony. That’s indicative of who are the real threats to security in our communities.

The Coeur d’Alene police foiled the plot based on a tip from a concerned citizen. The armed occupiers who consider themselves guardians against unrest had nothing to do with it. They were standing around trying to intimidate people who had gathered in good faith to observe Pride.

And if you’re at all confused about whether there are numerous elements among us who would have looked on with approval at whatever unrest Patriot Front was planning, allow your blood to run cold when you read what Coeur d’Alene Police Chief Lee White told the Coeur d’Alene Press on June 13: “It’s disheartening to read that people think this was [A]ntifa in disguise or a false-flag FBI operation. That is absolutely false. These people belong to the Patriot Front.”

Among the most prominent individuals peddling the false Antifa claim was Matt Shea, the disgraced former Washington legislator who an investigation in 2019 found had taken part in domestic terrorism by participating in armed conflicts with government officials in Oregon and Idaho from 2014 to 2016. Making Shea’s claims even more outrageous, the Spokesman-Review reported that one of the men pulled from the Patriot Front U-Haul and arrested June 11 actually attended Shea’s church.

Making things still worse, the Press reported on June 14 that Lee’s department — as well as the Kootenai County Sheriff’s Office — has been “inundated” with messages following the June 11 arrests, yet about half of them have been against the police, including doxxing and even death threats.

Despite every piece of available evidence, there are still people trying to legitimize or at least explain away and deflect accountability for what can only be described as a thwarted attack on a small American city by right-wing extremists. Barring that, they’re now threatening the police themselves.

This atmosphere of entitlement to intimidation has become a feature of our lives here in North Idaho over the past few years. And the main thing is that we need to start calling it what it is, and that is belligerence masquerading as the expression of civil liberties, but functioning as terrorism.

Of course, there is a legal definition for terrorism, and none of the individuals either in 2020 or last Saturday have been charged with that offense — and, in most cases, no offense at all. However, there is a dictionary definition of the term, which is “the use of violence and threats to intimidate or coerce, esp. for political purposes,” as well as “the state of fear so produced.”

Based purely on the usage of the English language, this is what armed occupiers and rioters — from Coeur d’Alene to Sandpoint to Washington, D.C. — have been and clearly continue to be engaged in.

Regardless of their pious claims, it is not “legitimate political discourse.” It is the leveraging of violence and the potential of violence to achieve political ends — it is the infiltration and unrest that they claim to stand against.

There is a threat among us, and it is the puffed-up fake-patriots who pretend to be our protectors while simply hunting around for an opportunity to hurt someone and get away with it. To quote from McCarthy-era comic strip Pogo, “We have met the enemy and he is us.”

Speaking to the Idaho Capital Sun on June 13, Idaho 97 Project Executive Director Mike Satz put a finer point on it: “some of our leaders appear to be encouraging these groups through their statements, conduct and associations. Our civil, political, business and religious leaders need to condemn the hatred we see spreading across our state.”

I keep thinking back to June 2020 as I try to wrap my head around what’s been going on around here, and I remember a quote from one of the Sandpoint militia occupiers, who was speaking with me the day after the original “Gun-d’Alene.”

“Coeur d’Alene last night was beautiful,” he said, going on to repeat the same nonsense about “Antifa” infiltrators that justified his comrades in arms to menace a group of teenagers who were peacefully demonstrating in favor of racial equality and police accountability in the wake of the George Floyd killing in Minneapolis that spring.

The kids involved in that demonstration were unequivocal in their statement that these armed people were not welcome — that they were the opposite of “protectors,” despite their laughable assertions to the contrary.

As local BLM organizers said at the time: “We reject the notion that armed militia members are here for protester protection. It serves only to intimidate the free and lawful expression of speech.”

Yet somehow, in some profoundly dark place in their minds, there are still ersatz “patriots” who think they are legitimate guardians of the republic. Tune into the Jan. 6 investigation committee hearings and you’ll see the depths to which this psychosis runs, and it is positively rampant here.

Some people will inevitably argue that such an indictment is “divisive” or “unfair.” Here’s the truth: They are the ones who are divisive and unfair. They have been grooming us to be willing sacrifices to their scofflaw vision of freedom-for-them, fear-for-all-others, which like all authoritarian impulses is brittle — they are offended by nothing so much as being reminded that they are the bad guys. And they are.

As Idaho Gov. Brad Little stated on June 13: “All Americans should be able to peacefully express their constitutionally guaranteed right to free speech without the threat of violence. It is what has always set America apart from other nations. I thank the many, many Idahoans from across the political spectrum committed to peacefully demonstrating. I commend our brave men and women in law enforcement for their swift action in Coeur d’Alene this weekend. Their diligence and quick response helped avoid a potentially terrible situation.”