About a year after the massive overhaul of War Memorial Field first started making headlines, the project — including the installation of artificial turf in place of natural grass — has mostly taken shape.

Since then, the vibrant green turf has been installed over the subsurface concrete base and shock pad, bringing together the completed elements that planners have promised will result in greater playability, better durability and improved water drainage. 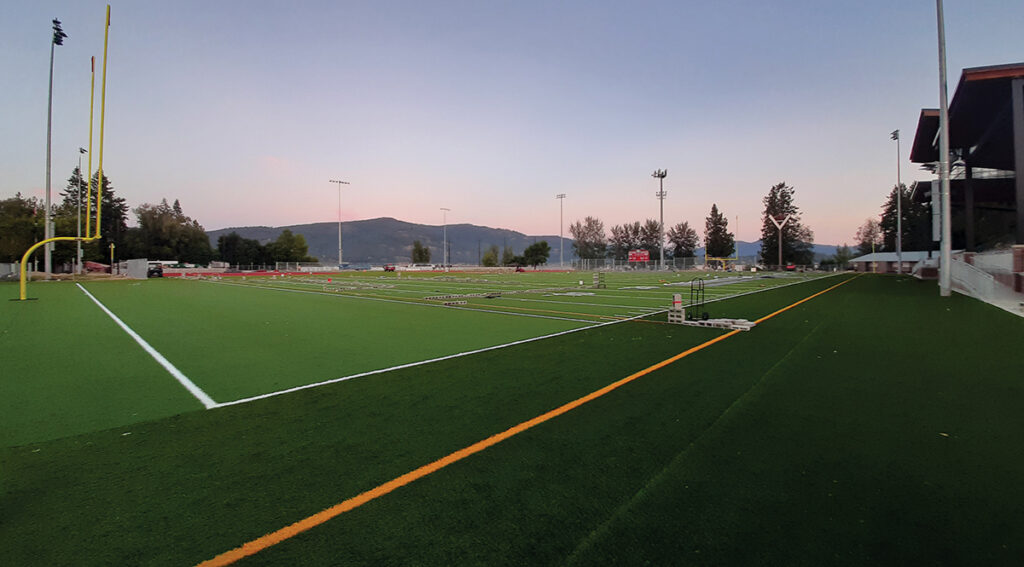 The artificial turf has been laid at War Memorial Field. Photo by Ben Olson.

“Historically, had we experienced a rain like this [on July 1] with the original natural surface, we would have been looking at several days of an unplayable surface,” he said. “This is going to make a big difference for a generation of kids.”

The natural rubber infill option originally selected by City Council in mid-December 2019 — following months of public comment — had to be switched out for the second-preferred option of cork with sand, Tadic said, owing to supply chain issues related to the COVID-19 pandemic. The change order came at no cost to the city, he added.

Surface features such as yardage numbers and lines have been added to the field as the Sandpoint High School football program prepares for its first home game in late August.

Phase 1 of the project was intended to be limited in scope in order to accommodate The Festival at Sandpoint’s annual concert series in the first two weeks of August as well as fall sports. However, due to the cancellation of this year’s Festival, Tadic said planners are exploring the possibility of further streamlining the project by adding certain elements that wouldn’t otherwise have been possible in Phase 1, such as dugouts.

“What that would do is not only take advantage of working with a really good contractor but … eliminate the need for another interim milestone within the Phase 2 project,” Tadic said, “and we would essentially come into next spring with a facility that’s ready for softball and baseball when their seasons start.”

Already, the new LED field lights are installed and working, and the Victory Bell at the south end of the field has been replaced in a volunteer effort led by Brody Durfee of Durfee Construction, who Tadic singled out for kudos. According to Tadic, Durfee as well as Friends of Memorial made the replacement possible along with donated time and equipment from contractors and crews.

Design for Phase 2, which includes improvements to the Memorial Field parking lot, boat launch and stormwater systems, is scheduled to be completed in late summer with bidding in September and an award granted in October. Phased construction would continue through the fall, leave off in the winter and resume in the spring when it is set to be complete.