Utara Brewery commits to the craft

Sometimes big dreams come in small packages, and for brewer Dave Kosiba, that’s exactly what Utara Brewing Company is to him. 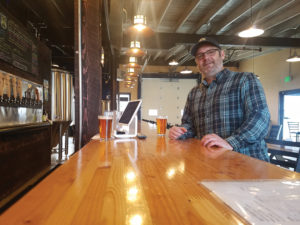 While the idea of large-scale breweries with massive distribution networks is all well and good, he is enchanted with the idea of a community brewery — one that keeps its footprint small and focuses on constant incremental improvements to its products and service. To that end, the Utara team is deliberately taking the roll-out of its business slow.

“We’re looking at this as a 10-year gradual roll out,” Kosiba said.

Thanks to a special arrangement with a brewery called Westwood Brewing, Utara has the flexibility to perfect its craft. They have, if not the first, one of the first alternating proprietorship business structures in Idaho, where both Utara and Westwood beers are brewed on site. That takes some of the financial pressure off Kosiba, who would rather focus his energies on creating newer, better brews.

“It’s really cool to have that job security,” he said.

Kosiba learned much of the brewing craft and trade while working with Laughing Dog Brewing between 2009 and 2012. During that time, he was immersed in the complexities and nuances of the brewing process. It was an important step in a lifelong commitment to brewing education. To that end, the brewery holds classes every second Tuesday of the month for $15, where a group of about 10 people dig into the subtleties of various beer types. 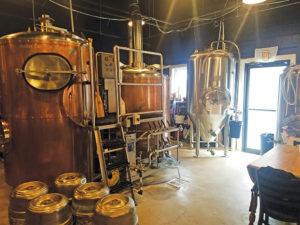 The brewing equipment at Utara creates the brewery’s own creations as well as those of Westwood. Photo by Cameron Rasmusson.

Another part of the brewing passion is working together with fellow brewers to create the optimal experience for customers. Kosiba accomplishes that through outreach efforts like bringing guest beers from other breweries on tap.

“Craft brewing clientele are demanding that local breweries work together to meet their needs for diversification, variety, collaboration and community,” he wrote in a mission statement.

Utara Brewing is located at 214 Pine St. in a historic building that once served as an oil change business and, before that, a blacksmithy. While beer is their focus, Utara also offers an appetizer menu to suit the happy-hour customers that make up the bulk of their business. It all adds up to a community gathering place open from 3-8 p.m. Monday through Thursday and 12-9 p.m. Friday and Saturday. Those hours will likely expand in the summer.

“Slowly but surely, the pieces of the puzzle are falling into place,” said Kosiba.