Recently, the city of Sandpoint launched Engage Sandpoint, making use of the service SeeClickFix.com. I was intrigued by this, being a long-time software geek and early adopter. I created an account, set up notifications and began to watch. 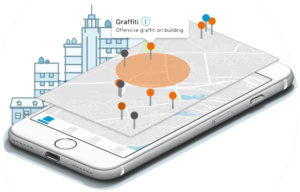 The concept of SeeClickFix is straightforward: see something that needs fixing, open the SeeClickFix app or your web browser, take a photo of the thing needing remedy (if using the mobile app), enter a short description and submit it. Your report gets added to the Sandpoint “Watch Area,” where anyone subscribed to that area gets notified of your submission. Other people can comment on your report, add information, debate the issue and such.

So far, interesting. But then I observed something that surprised me: I started seeing responses to the reports by city government officials acknowledging the report and handing it off to the appropriate department. Sure, there was sometimes a bit of ping-pong/hot potato involved as an issue was bounced from one department to another, but the hand-offs generally seemed to make sense:

• Some traffic lights and crosswalk lights were not working and were referred to the public works director.

• Animals running loose were referred to the community enforcement officer, who collaborated with Ponderay Animal Shelter.

• Mysterious traffic patterns like the one-way segment of Pine between Fourth and Fifth were called out, referred to the city administrator for review.

• Trees that were either removed inappropriately or were blocking traffic visibility were referred to the urban forester (frankly, an awesome title).

• Yard sale signs at Cedar and Boyer is a hot topic and was assigned to the city administrator.

But then something I really didn’t expect to see began to happen: Things started getting fixed.

Right there, in the reports, departments weren’t just responding, directing the report to the people who needed to see it. They were actually investigating the issues and implementing solutions.

Launching a program like this isn’t trivial. You need your tech team to stay on top of any user issues and coordinate with the service this is based on. You need buy-in from all the government stakeholders to ensure they’re looking at the reports and responding. It takes a ton of follow-through by the city administration to make sure issues are getting addressed. The biggest challenge of a program like this sustaining momentum, after the initial blush of newness fades. And finally, achieving this level of diligence, seeing issues through to resolution, is a nontrivial task.

It’s early yet. A lot can go sideways. But, based on what I’m seeing so far, I have to offer healthy kudos to the folks in the city administration for their commitment, resolve and diligence.

David Phillips is a technology consultant/photographer/filmmaker who arrived in Sandpoint from Colorado by way of Seattle and points further west.