Back to the Future in Spokane?

Last weekend, Cadie attended a conference in Spokane. I tagged along to work in the hotel room. Upon walking around downtown the first evening, we both noticed something was different about Spokane. 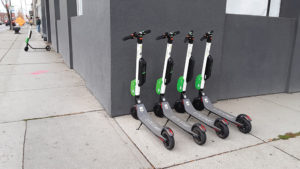 Lime e-scooters wait for their next victims on a Spokane sidewalk. Photo by Ben Olson.

Along with the usual collection of tweakers, homeless and DWSTOTS (Dudes Who Shout to Themselves On The Sidewalk), there arose a new faction. Everywhere, and I mean everywhere, there were people of all ages and proclivities zipping around on these little green and white electric stand-up scooters.

At first blush, I believed Cadie and I somehow slipped through a time vortex and arrived in the not-too-distant future where everyone zipped around on electric scooters. Every group of riders looked like Biff’s gang of hooligans in “Back to the Future II” minus the plastic clothing and the hovering.

I soon found that we hadn’t, in fact, slipped into future Spokane. The scooters are part of a two-month trial program started in September by Lime, a bicycle and scooter sharing company based in the Silicon Valley.

Here’s how it works: the scooters and bikes are dockless, which means you can find them just about anywhere: parked in front of bars, on bike paths, on the Riverfront Park bridges. Wherever someone left it, that’s where it is. Users download a free app, supply their credit card information and pre-pay for a block of time (I purchased $10 and rode all weekend) and they’re set.

When you find a bike or scooter, you scan the code with your phone and a pleasant ding announces that you’ve now joined the future. Look out McFly, here I come.

It costs $1 to start it up, and 15 cents per mile of usage. On the scooter, the throttle is a simple button on the right handlebar and the brake is either a button on the left handlebar or a squeeze style like bicycles have. The bikes – well, who cares about the bikes, I went for the scooter.

The first ride was exhilarating. You have to push off a few times to get up momentum, then depress the throttle and with a rush of acceleration it takes you silently into traffic to tempt fate.

In fact, there’s actually a sort of wild-west mentality right now, as I felt sure that these things would be more heavily regulated in the future, but for the trial period, Spokane literally seemed like a free-for-all green version of Mad Max, but instead of steampunk dystopian wanderers there were hipsters and teens hooting and hollering around the streets like kids on their first rollercoaster ride.

There are obvious problems to deal with. One burrito server told me he hated them with a passion: “I haven’t ridden one yet, and I won’t either,” he said. “I can’t wait until they’re gone, to be honest. People are tossing them off the bridges into the water, tweakers are pulling out the guts, trying to sell the parts.”

But, for every hater, there’s a 40-something guy with a perma-grin barreling down a walkway like the devil himself is after him, followed by his two children and mom closely behind.

After the ride, you hit the “lock” button on your app and end the ride. The app sends you a notification telling you how much carbon you saved in the distance you covered.

While one part of me thinks these scooters are annoying and pervasive, as well as a clear danger to life and limb, the adventurous part of me says, “Who cares, let’s ride!”

Like it or not, transportation like this is the future. Instead of bulky cars burning fossil fuels, if you can walk out your door, search for a Lime scooter (they have a locater app that “dings” an available scooter, kind of like that button you used to push to find your cordless phone), and ride.

While the program obviously needs some adjustments (cities with similar e-scooter trials have seen an uptick of emergency room visits), I see it as a fun way to promote green transportation. Also, it generates a lot of jobs. When the scooters run out of battery life, or have a mechanical program, there is an army of employees who track them down using GPS, load them into their cars and charge them up for another day on the wild streets. We saw one employee doing just that – loading four of five of them into his van. It seems like a lot of work, tracking these suckers down all over hell and gone, but you could also look at it as a job where you get to engage in a scavenger hunt every day.

The future is pretty cool, McFly.