To those of you who’ve attended Catholic school, the words “Iron Nun” may conjure up strong images, but certainly not a picture of the sweet, unassuming octogenarian that has endeared herself to the Ironman community for decades now. For many, seeing her smiling face at the starting line represents a feeling of belonging and all that is wonderful about the sport of long-course triathlon. For Sister Madonna Buder, the “Iron Nun,” her love affair for the sport culminated in her being inducted into the USA Triathlon Hall of Fame in 2014. 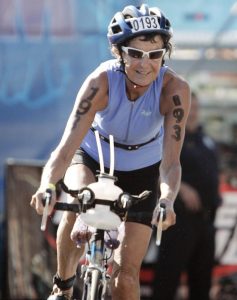 The Ironman is a triathlon with a 2.4-mile swim, a 112-mile bicycle, and a 26.2-mile run—in that order and without a break. It is consider one of the hardest single-day races in the world. So imagine, if you will, the shock on everyone’s faces as they see an 82-year-old nun from little old Spokane, Wash., cross the finish line. To put this in perspective, you have to realize that all these races have qualifying criteria as well as cut-off times: different stages have times after which you are required to “drop out” and the entire race has to be completed in under 17 hours.

Sister Madonna Buder started her career when most triathletes are hanging up their Speedos and running shoes. She started training at 48 under the advice of Father John, who recommended it as a way to balance mind, body, and spirit and a path to inner calm, but didn’t complete her first Ironman until 55. After that, it was literally “off to the races” for the sister, competing in over 325 triathlons and 45 Ironman distances. Many of these races had to add new age brackets just for her.

Her first race ever was Bloomsday and when she decided she wanted to run the Boston marathon she sought the advice of her bishop, who whole-heartedly encouraged her, reminding me of a story about Pope John Paul II. The Pope grew up in Poland backcountry skiing.  When he was a bishop, he was skiing—I like to think in a purple robe, but I don’t know—when one of his peers asked, “Isn’t it unbecoming for a bishop to ski?”

“What is unbecoming for a bishop,” John Paul reportedly answered, “is to ski poorly.”

With the blessing of the Catholic Church she was free to continue her life of service and chase her dreams.

What really stands out about Buder is her complete humility.

“I didn’t know what they were going to do with it,” Buder said. “They talk about online blog and all that stuff, I don’t even understand. All I have is basic email… I’m just amazed that people are tickled by it.”

In looking into her life, I almost overlooked a small item in the news: “Nun Rescues Neighbor from House Fire.” You guessed it—the “Iron Nun,” who at this point is starting to take on superhuman qualities, strikes again. Characteristically, she credits divine intervention. Although she discovered the fire because she gets up early, she usually doesn’t open the curtains.

“Something said, ‘You know it’s light out there, pull the curtains’ and when I pulled those curtains, oh my gosh. I saw white smoke billowing,” she reported. Then she dialed 911 and ran into the smoking house (At this point, she’s 86 years old).

According to the interview, “the room was filled with smoke and the kitchen curtain looked like it was ready to catch on fire.” She found the neighbor and began yelling. “I just yelled as loud as I could, ‘Get out! Get out! Your house is on fire!’” she recalled.

Once again, Sister Mary Buder doesn’t see her actions as out of the ordinary.

“I didn’t do anything heroic. I just noticed, that’s all,” she says, adding that the real heroes are the 911 dispatchers and firefighters.