There’s often a flutter of excitement you hear when John Craigie returns to Sandpoint for one of his trademark shows. The traveling folk singer holds the distinction for being one of those rare people Sandpointians consider local, though he wasn’t born here. Hell, he doesn’t even live here. But they still love him, and so do I. 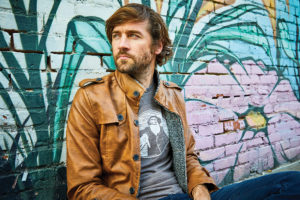 John Craigie, thinking about how he’ll crack you up and take your money. Photo by Missing Piece Group.

Craigie will be playing back to back shows at Di Luna’s Cafe at 7:30 p.m. March 23-24 with Ben and Cadie opening March 23 and Justin Landis opening March 25. Though the shows are listed as sold out, don’t be afraid to get on the waiting list, as tickets often open up at the last minute.

Coming off a successful summer opening for Jack Johnson, Craigie will be promoting his latest album, “Live Opening for Steinbeck.”

“The last live album I did was really well received, so I was excited to follow up,” said Craigie. “Just like the last album, there will be some classic stuff that never had an official release. My Burning Man song is on there. Also my Trump song and a few things that are semi-topical, if you count a year and a half as topical.”

As with many of his annual returns to Sandpoint, Craigie is always full of stories from the road, which he deftly spins into banter during a live show. After spending the summer with a big name like Jack Johnson, the stories will certainly be worthwhile.

“The title of this album is a reference to a bit I do about when you’re an opener, you’re nervous, but everybody’s cool with it because they didn’t really come to see you,” said Craigie. “It’s also funny to me that openers are distinct in music. You don’t buy a copy of ‘The Grapes of Wrath’ and start by reading a short story by John Craigie. Books just don’t have opening acts.”

Craigie played 16 shows with Johnson, spread throughout last summer, some in front of arena-sized crowds of over 20,000 people.

“He heard the first live album and is a fan of that kind of funny talking folk singer storytelling thing,” he said. “He reached out and last winter we hung out for a little bit in Oahu. He was scoping me out, making sure I wasn’t a douche. He was very sweet, kind and smart. He knows his significance in the scene, but he’s also very humble and knows he’s not ‘indie cool.’ He was very humble about all that stuff.”

For someone who keeps up with current events to mine songwriting material, Craigie now feels as if he’s in the midst of a motherlode.

“When Bush was elected in 2000 and again in 2004, I was not a good enough artist to respond in the way that I wanted to,” he said. “But, when Trump got elected, I told myself I was ready. I have the training to at least comment on this somewhat correctly.”

Craigie acknowledged the difference between songwriters of the past and those trying to sift through the modern age for material.

“My heroes – Bob Dylan, Neil Young – they were creating when one or two things would happen a year and they’d write about it,” he said. “Now, there’s so much to comment on all at once, it can be overwhelming.”

Craigie is excited to return to his surrogate home town of Sandpoint, especially to play at Di Luna’s.

“I think it’s one of my favorite sit down quiet listening rooms,” said Craigie. “It’s the most intimate and well behaved room in Sandpoint.”