Confession time, 7B. Recently, I got a surprising diagnosis after a very long time of chronic health issues. Any diagnosis that ends a sentence with “for the rest of your life” is always jarring, but it’s not always a death sentence.

Once I found out what I had, I do what I do best and dug in to research this new term that would go on to define me for “the rest of my life.” 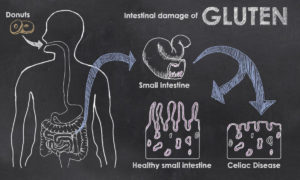 As with virtually anything medical, there’s an immense amount of information out there. For every nugget I found, I had to pry it out of fist-sized clumps of internet condescension, fear-mongering and misinformation.

Celiac’s is a hereditary autoimmune disorder where your body reacts violently to gluten. That was a giant and complicated bowl of word salad sprinkled with feta and ghost peppers, so I’ll break it down.

Celiac’s is hereditary, which means it’s passed down through your family’s genes, so you can’t catch it  from me unless I created you. We don’t fully understand what genes cause it, we don’t even know why it can skip generations while hitting another very hard. To make things even more confusing, sometimes symptoms won’t show for years or even decades, and for some the symptoms can be terrible or barely noticeable for others.

Gluten is what triggers a reaction in those that suffer from Celiac’s. This is where most of the bad information starts to circulate. You’ve probably heard about life-changing gluten-free diets or heard the rage of paying an extra $4 at the store for a loaf of gluten-free bread the size of an English muffin.

Gluten is the name for naturally-occurring proteins in wheat, rye, barley, and any cross of those. That’s it. Just those.

If you don’t have Celiac’s, this doesn’t happen, and ingesting gluten has no effect on you.

So what about these miraculous gluten-free diets everyone’s going crazy over?

I can’t say a gluten-free diet will absolutely work for you if you don’t have Celiac’s, but there are some obvious benefits to not being able to eat wheat products.

Celiac’s Disease seems like an oddball thing that’s just popped up in the past few years. This is most certainly not the case. It seems this way because we only put a name to it in the ‘50s, a cause to it in the ‘60s, and underwent a scientific-culinary revolution in the 2000s. It’s not a rare disorder. As many as 1 in 100 people in the United States have Celiac’s, and many don’t show symptoms or even know they have it.

There is evidence of Celiac’s disease as far back as ancient Greece, where the name originates (Coeliac, abdomen in Greek). During the 1850s, there was some pretty extensive research into it, but they lacked the ability to identify or even know what proteins were back then.

In the ‘50s, the cure for chronic diarrhea was a strict diet of bananas. It worked, until the patients were reintroduced to bread.

The symptoms are pretty jarring, and they aren’t uniform. It all starts in the small intestine. While your body is so busy attacking itself, thinking it’s been poisoned or invaded, it starts pushing the partially digested food out as quickly as it can in the form of diarrhea. At first, this can seem like you just ate something bad. When it persists for days, weeks or even months, even if you don’t seem sick, it’s time to talk to a doctor.

The damage the body does on the small intestine is unseen. Physical damage can cause temporary or even permanent lactose intolerance. Malabsorption (not absorbing nutrients) causes chronic fatigue, sleeping disorders, extreme weight gain or weight loss in the short-term. If left untreated for years it can cause osteoporosis (brittle bones), chronic full-body inflammation and colon cancer, the second most-lethal type of cancer in America.

It’s not all gloom and doom. The Celiac’s diet forces a lot of concessions, but we live in an age of culinary wonder. If you want a gluten-free, dairy-free pizza, you can find one made from rice flour and cashew cheese that won’t cause a reaction. Heck, we have a whole section for gluten-free cooking at the library.

I’ll leave you with my own personal favorite gluten-free guilty pleasure. Soft boil an egg, cut an avocado in half and put the egg in the middle. Now wrap the avocado in bacon and deep fry it (no batter, obviously) or broil it until the bacon is to your liking. Slice some tomato over top of it once it’s out and maybe stab some corn chips in there, and voila! Gluten-free, lactose-free bacon avocado bomb!