Being the macho man that I am, I once refused to see plays when I lived near Broadway in New York. Shortly after, my father coerced me into going. I loved it.

It would taste like vinegar if I ever uttered those words aloud, but the way that play hit my soul struck me. It was similar to the feeling when a well-sung national anthem plays on a big stage, a swelling of pride and love for humanity.

This upcoming Tuesday and Wednesday will hold tryouts for the upcoming “Hamlet” production at the Forrest M. Bird Charter High School. The seminal Shakespeare tragedy is set to hit the Heartwood Center stage this November 11-12 and 18-19. About a dozen roles will be cast; will you be one of them? Auditions take place 6 p.m. Sept. 6 and 7 at Forrest M. Bird Charter High School. 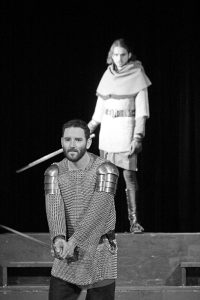 Shakespearean monologues are recommended, but certainly not required. As long as you can demonstrate the ability to memorize and deliver the language, you have a shot.

“Even for a town the size of Sandpoint, it’s amazing the amount and quality of people we audition,” said director Michael Bigley

The Unknown Locals, a local theater company that combines original plays and the classics that we all love, is heading up the production.

“This will be our seventh production in the last three years,” said Maddie Elliot, who along with her husband, Chris Herron, produce plays for Unknown Locals. “There are sure to be some familiar faces, … It’s always exciting to have new people get involved.”

“Last spring, we put on ‘Macbeth,’ which was a big success,” said Bigley. “This year we will be following that up with ‘Hamlet,’ and although the two are quite varying in style, one comparison can be made.”

Both plays feature choreographer Cory Repass—the catalyst behind the amazing sword fighting that took place in the many fight scenes of ‘Macbeth.’

The storyline of ‘Hamlet’ doesn’t contain as many of these open battle scenes, but you can be sure that with him back in the fold, the closing act will be spectacular. Repass’ work was the “highlight of last year’s show” according to Bigley.

After the success of last year’s ‘Macbeth,’ Bigley is excited to direct the Unknown Locals’ latest take on Shakespeare.

When not directing on the stage, Bigley teaches English at the Forrest M. Bird Charter High School. Before that, he pursued a PhD in Medieval Studies from University of California, Berkeley.

He urges all who are potentially interested to not be leery of auditioning. The script to be used this year will be edited down, meaning a shorter and leaner production time.

Years ago in Sandpoint, auditions were held for the play, “The Foreigner” which still resonates strongly with Bigley as this was the first time he was cast alongside his son in a play. Ever since then they have both been into theater.

After discussing with Bigley a few of the plays I’d seen while living in New York, he said, “I read the New York Times theater page and kind of just weep silently to myself … Here in Sandpoint, we have to make our own … If in New York, I certainly wouldn’t have the opportunity to direct ‘Hamlet’ on Broadway, as that would be a career high for any world-famous director.”

For more information check out the Unknown Locals Facebook page, which contains all audition announcements and additional contact information.