Of all Sandpoint’s famous residents, Ben Stein might just be the most prolific around town. 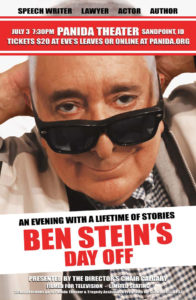 The speech writer, lawyer, actor, author and part-time Sandpoint local is a common summertime sight at local hotspots and restaurants. He frequently mentions Sandpoint when writing columns or making media appearances. It’s fitting, then, that he chose Sandpoint’s historic Panida Theater when selecting a venue for his latest live show, “Ben Stein’s Day Off.”

“Ben Stein is a part-time resident here and always talking to people when he’s out and about, so he’s another one of our local boys,” Panida Theater director Patricia Walker said.

And this isn’t just any live show. It’s a taped event that will eventually be turned into a special production for television and Netflix. According to Walker, it’s a thrill to see the theater in a co-starring role with Stein.

“It brings us a little extra exposure nationwide and worldwide,” she said.

The possibility first came up when Mike Visser, the show’s producer, mentioned the Panida to Walker as a potential venue. He’d seen a show at the theater previously and loved its historic atmosphere. After Visser and Stein narrowed potential venues down to a few final choices, the Panida emerged a clear winner.

Visser and Stein turned to local talent to bring the show together. Local resident Mark Watson worked to coordinate the event, while Becky Revak handled the set and logistics.

The show itself will center on a conversation with Stein that covers the lifetime of stories he’s collected through a career in politics and entertainment. According to Walker, there will be a few special guests appearing throughout the night whose identities are a secret even to Panida officials. So show attendees can expect a few surprises throughout the night. What’s more, proceeds from ticket sales will benefit veterans and the Panida Theater itself.

Buy tickets for “Ben Stein’s Day Off,” set for 7 p.m., July 3, at Eve’s Leaves or online at www.panida.org. There will be limited seating for the show, and it’s expected to sell out, so act quickly if you intend to go. Need another reason to get out to the Panida Theater? At 3:30 p.m. June 30, 5:30 p.m. July 5 and 7:30 p.m. July 6, the Panida Theater will screen “Ferris Bueller’s Day Off,” which features perhaps Stein’s most famous movie role.