When it comes to remodeling a historic building, you’re not always pleased at what is found underneath. In the case of the old Truby’s building in Sandpoint, however, owner John Ford couldn’t be happier.

When his crew began demo on the building located at Second Avenue and Main Street, they were pleasantly surprised when uncovering an old advertisement. It’s referred to as a “ghost sign”—an old, hand-painted advertising sign that has been preserved on a building. The sign was for Sandpoint Cleaners, a business owned by Ed Parkins from 1945 to 1960.

“Finding that sign was a complete surprise,” said Ford. “We took off the wood in strips before the aggregate. We were all trying to guess what it said as we took more and more off.” 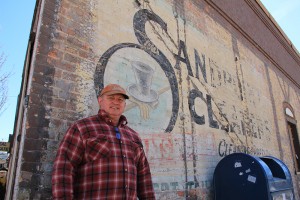 Owner John Ford stands in front of the historic “ghost sign” for Sandpoint Cleaners, which operated from 1945-1960. Photo by Ben Olson.

After uncovering the sign, the question remained what Ford would do to preserve it.

“We talked with the city, and they were wonderful to work with,” said Ford. “They’re going to bring it to the Arts Council and get a recommendation for restoration. If there’s a way to restore it, we’ll do it.”

It’s clear the community agrees with Ford in regards to the sign. When the Reader posted a photograph of the sign on our Facebook feed last week, there were a couple dozen comments, mostly from people who wished to see the sign remain.

“I was so young when my parents started Truby’s that I did not remember this,” wrote Valerie Truby Dressel. “Very cool!”

“Wish they would seal it and leave it!” wrote Kimberly Neustaedtler. “It’s beautiful!”

Since purchasing the building from foreclosure last November, it has been Ford’s intent to restore the building according to how it originally looked when built over 100 years ago. That’s easier said than done, especially when there are very few photographs of the original façade.

According to Cameron Murray, Museum Administrator at the Bonner County History Museum (BCHS), the age of the building can be narrowed down thanks to an early photograph.

“We think it was built prior to 1907 because it was originally the Interurban Railway Depot Station,” said Murray. “There is a great series of photographs that were taken at a May Day celebration in 1907 or 1908 … you can see the Depot and a car in the background.”

Both Murray and Ford are eager to obtain any additional photographs that readers might have of the building. If you have such a photograph, please contact BCHS at 263-2344.

Renovations to the building over time contributed to a massive clean up that is still taking place, said Ford.

“We hauled out 40 loads of previous remodels,” he said. “There were three vaulted ceilings in there. Now it’s like the building just took a deep breath.”

Ten tons of material alone was hauled away that was hanging off the building, including the iconic mansard that gave Truby’s the Bavarian look many remember.

“It has good bones,” he said. “There are no leaks whatsoever. All the wood is solid with not a single piece of rotten wood. It’s amazing. It needed somebody to love it, to care for it.”

Ford is eager to begin the renovation phase of the project while saving all the materials for possible use for storefront and window frames.

“Anything of value, we’re saving,” he said. “Anything and everything; wood, timber, you name it.”

The ghost sign wasn’t the only historical find during construction.

“We found some old receipts from the 1920s when it was called Sandpoint Grocery,” he said. “It was funny, they had their phone number listed; it was 18.”

Another great find was a series of paintings done by a Sandpoint artist named Eugene B. Hayes. Two depicted snowy scenes from Schweitzer in the early days.

“There were these four paintings we found blocking off the windows,” said Ford. “I was told there was this guy Hayes who was a logger in town and had a logging accident and lost his hand so he became an artist. We’re trying to figure out the best way to restore them, since they were outside so long and have sun damage.”

Ford said Hayes, 93, now lives in Oregon. He plans to package the paintings up and drive down to see Hayes for a consultation about color palettes and how to best pull off a restoration. Another one of Hayes’ paintings was uncovered inside the 219 Lounge inside the front door during their restoration in 2014.

Patty McGovern, whose father was Ed Parkins, the owner of Sandpoint Cleaners, remembers a funny story from the old days: “When dad owned it, he had a local football player [Ed “Skip” McFarland] that would open up and start the boiler in the mornings and do all the deliveries after school,” said McGovern. “One day they had a race around the block. Dad gave him a head start of a half a block. Everyone was out watching, and right at the end Dad beat him, but ended up splitting his pants open. We were a pretty small town then.”

Ford hopes that his restorations of the building will please the locals and visitors alike, and is hoping to have the building ready to go by summer. He isn’t sure what type of business will move in, but he imagines some form of hospitality would work well there.

“My job as the owner of property is always to defend it,” he said. “If it gets handed over to the next guy in better shape, that’s doing it right. That’s the way to do it.”