Camp Kaniksu: Kaniksu Land Trust provides kids the chance to learn and play in the wild through annual summer camps

When it comes to combining education and adventure, Dave Kretzschmar brings his A-game to Camp Kaniksu. 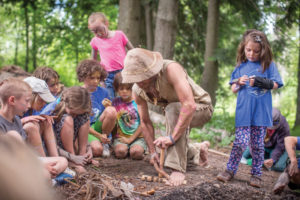 “I hear a lot of worry about this generation and their addiction to technology and subsequent disconnect from nature,” Kretzschmar wrote in a reflection on the KLT website following last year’s camp. “These three weeks of camp have shown me once again that given the opportunity, kids are happy to leave the screens behind and go outside to experience the real thing. And they fall in love.”

It’s a philosophy that echoes through everything KLT does: provide the resources for community members to get outside, and surely, they will. This is especially true of youth, and one major way KLT impacts area children is through their annual Camp Kaniksu — a series of nature-based camps for kids ages 6 to 12.

KLT Outreach and Development Coordinator Cami Murray said most people assume kids — especially rural kids — are getting enough time outside, but research shows that the opposite is actually true. Camp Kaniksu aims to provide those opportunities and foster a desire for more time in nature after camp has ended.

“If you let kids outside and give them permission to play, they will play,” Murray said. “We see camp as an opportunity for kids to learn that joy.”

Camp Kaniksu is held in the Pine Street Woods: 180 acres of woodland KLT recently acquired after years of planning and fundraising. During camp, children are told to find “their place,” where they will return to several times during the camp to spend quiet time and observe their surroundings. Now that the Pine Street Woods officially belongs to the public — and is intended to remain that way forever — Murray said kids have the unique opportunity to feel a sense of ownership and pride for the woods early on.

“Kids can find their place when they’re 6, and go find it later in their life,” she said.

Tim Bearly said his children, ages 7 and 9, have both attended and loved the camp. The oldest, Freya, has been to other camps and says Camp Kaniksu is her favorite. Bearly described Kretzschmar as “a bonafide outdoorsman” and said the nature projects he facilitates during the camp educate and entertain the kids.

“It’s helped both of them develop a stronger appreciation and love for nature,” Bearly said of Camp Kaniksu. “They can’t wait to go back this summer.”

KLT is offering five weeklong camps this year starting in late June. Each camp is Monday-Friday and runs from 9 a.m. to 3 p.m. Some camps are for children ages 6-9, others for ages 9-12. The first four sessions are $80 each, and the final camp — which includes an overnight stay —is $100. Scholarships are available, no questions asked, Murray said. While some sessions are already full, email Murray at [email protected] with your name, your child’s name and age and which session you’re interested in to be added to a waitlist.

To learn more and check camp availability, visit www.kaniksulandtrust.org/klt-education or call the KLT office at 208-263-9471.