Gov. C.L. “Butch” Otter fielded the concerns of North Idaho citizens Thursday, Oct. 19, when Ponderay had its turn as Idaho’s Capital for a Day. 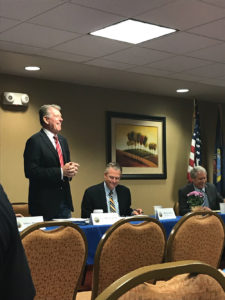 Otter said Capital for a Day is a way to hear “small community” concerns straight from community members. The goal in holding the day-long open meeting at the Holiday Inn Express was to hear questions and issues and then to look for solutions or action plans moving forward. The governor has visited every county in Idaho through Capital for a Day.

“Those local solutions are always best, but sometimes we have to have that interaction (between the state and local governments),” Otter said.