No, it’s not the name of a band, but it does rock

Towards summer’s end, as the sunlight hours shrink and the tourists begin to disappear, there’s always that urge for one last BIG adventure before the snow falls. Maybe a short backpacking trip, maybe an off-trail bushwhack, maybe a destination hike to some high alpine lake, so you can impress that hot catch from dollar beer night with your fly-fishing skills.

For your consideration, we present: The Beehive Five. Or, the High Traverse. Or, the Harrison-Beehive Traverse. Call it what you want, travel it in whatever direction you will, this hiking route is the stuff of local legend. The Reader has hosted a selfie-video of the route by Benjamin Read on its website for the past year. Rich Landers, staff writer for the Spokesman-Review, described the route briefly in his ode to “Rock-Hopping” a few weeks ago. Ask anyone at the Sandpoint Rock Gym about “The Fin,” and they’ll know exactly what ridgeline you’re talking about. 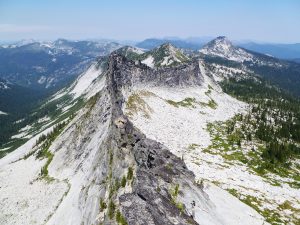 The Fin, with Roman Nose in the background. Photo by Jen Heller.

It’s not that the route is impossible. It just has everything, from views to lakes to endangered species to elements of human interest.

The High Traverse can be run in a couple of different directions: from the Beehive Lakes trail up to the ridgeline, following it northwards to Harrison Lake; from Beehive Dome in a bushwhacking scramble up to the ridgeline, and over to Harrison Lake; or, reverse either route, starting from the Harrison Lake trailhead and exit via one of several routes towards Upper Pack River Rd. If scrambling along cliff edges for miles sounds too strenuous, or if you’re afraid of a little vertigo, any of these options can be amended with some savvy route-finding for a flexible and fun “Lower Traverse.”

And then, there’s the side excursions. For example, starting from Beehive Dome leads to a hallway-like break in a rock wall two-thirds of the way up to the Twin Peaks. It feels like a steep version of a medieval pathway, hiking between two narrow walls left by the ancients. Heading downhill due north through the notch, you’ll quickly access the deep (and impressively unfrequented) Little Harrison Lake. Calling Little Harrison a “gem” is super unoriginal, but it’s too deeply hued and blued to be compared to much else. If you don’t keep mind of the time, you may be tempted to sit and stay just a little too long.

For all its solitude, the basin that holds Little Harrison Lake holds plenty of evidence of human activity. Hiking along the crest, it’s easy to forget the existence of humans initially, as golden eagles soar by and inspire panicky peeping from the shy pikas scurrying among the talus fields. And then, looking down, you’ll see the signs of the people who’ve been here before you. A “Happy Birthday” message for “Delilah” painstakingly spelled out with white rocks in an open green area near the shores of Little Harrison. Or, further along, beneath the towering cliffs of the Fin, the remains of a crunched aircraft tail that’s been laying in the boulders for 30 years.  Knowing that everyone survived both the crash and the long hike out through the snow makes spotting the half-buried pieces much more enjoyable. If you’re paying attention, you may even spot the sign commemorating the incident up on the crest. 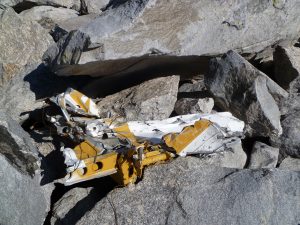 Aircraft wreckage found on the hike. Photo by Jen Heller.

A winter’s hike might allow a glimpse of that elusive herd of woodland caribou that still occasionally wander down the Selkirks from Canada. However, August-September really is the best time to hike the Crest. Grouse scurry about confused and frantic before thundering away loudly. A half-molted ptarmigan stalks quickly away in the underbrush on its feathered feet. While the Pack River Valley can seem calm and still during your sweaty ascent, the moment you gain the ridgeline, the winds rushing eastward from Priest Lake can be stunningly strong and cold, and they multiply the dizzying effect of standing on a boulder at the top of everything.

Depending on the route you choose, you can anticipate traveling six-10 miles, with plus or minus 3,500 vertical feet pitched in. While there’s no set path, all of the High Traverse can be slowly picked through on your own two feet except for The Fin at the midway point. Let’s just say The Fin will make you wish you had taken that pee break earlier. True, if you’re a climber, it’s only graded at about 5.6. For us laypeople, interpret that as “downclimb now and forget your dreams of hiking across this sucker.” For The Fin, you’re going to need ropes, climbing experience, and calloused hands suited for scrabbling across black lichened-granite faces (if you’re worried about missing out, just keep this in mind—downclimbing gives you a good chance to get an up-close view of that aircraft wreckage, with the option of scrambling right back up onto the ridge as soon as you’ve passed The Fin). 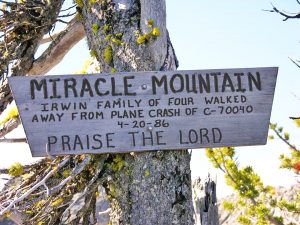 The sign commemorating an amazing survival. Photo by Jen Heller.

At day’s end, the High Traverse will likely leave you with 4-5 peak ascents of 7,000-plus ft under your belt; a couple of incredible photographs; and some very sore muscles. Not a bad way to cap off a summer’s adventures.