Drawing with the wrong side of your brain?

I can’t draw — never could. It is a gift my mother bestowed upon my brother, which has always brought me a sense of great jealousy. Drawing is often thought to be a mysterious, magical ability that a lucky few possess. While many people are born with an innate ability to draw, people often fail to realize that drawing is simply a skill — a teachable, learnable skill.

Two years ago, I had an Atlantic crossing in my sights. Knowing I would need plenty of tasks to fill the idling hours throughout each day and, hoping to utilize this time as a platform to develop a new skill, I decided I was going to learn to draw. 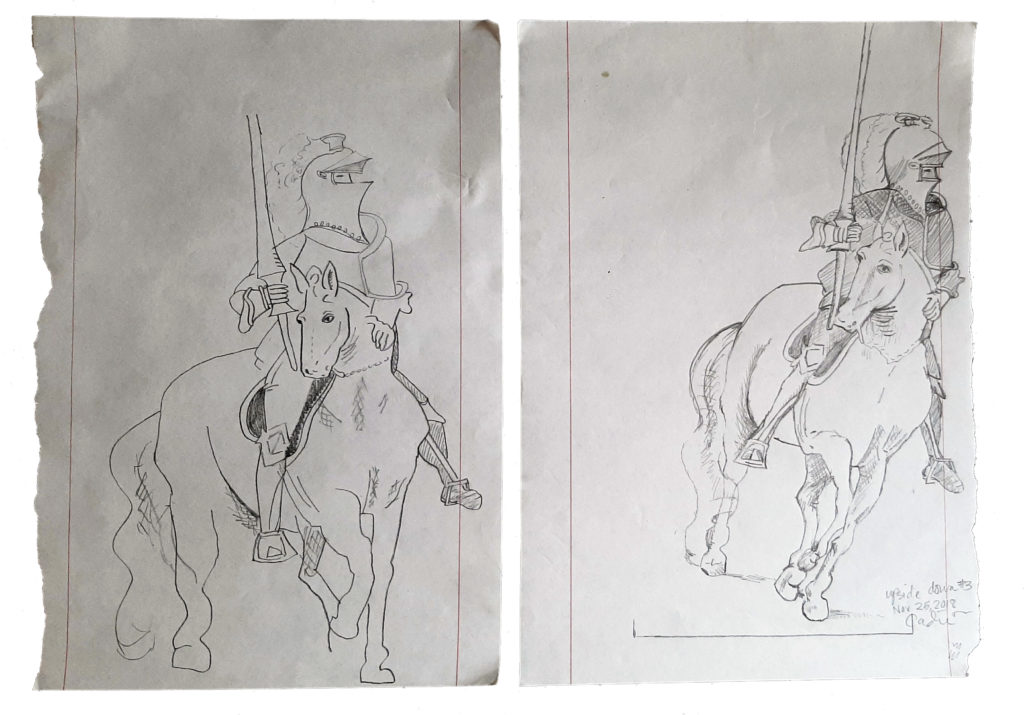 I recalled a continuing education course that I once attended titled “Building the Brain.” The instructor designed the class to teach strategies that support the brain’s ability to rewire itself. One such strategy involved building and strengthening connections in the right hemisphere of the brain — specifically connections involved with visual perception — supporting the argument that reinforcing these connections by learning the skill of drawing could improve critical thinking skills and problem-solving abilities.

The speaker introduced a book, Drawing On the Right Side of the Brain, by Betty Edwards. After a brief summary of its contents I was convinced that this was the book for me. I purchased it just prior to my sailing adventure with the romantic intention of learning to draw while thousands of miles from land.

I began the book while traveling through Portugal; however, I was unable to complete it during the ocean voyage as my focus, attention and ability to remain still were all swept away by the big sea. The book was closed. It was not to be re-opened until a recent pandemic swept the globe, stealing my full-time working hours, eliminating all social engagements and leaving me with nothing but time. Time to draw.

A common misconception expressed among those who claim that they “cannot draw” is the belief that they lack creativity. Edwards argues otherwise. She attributes one’s ability to draw to their ability to access the right side of their brain: a hemisphere of the brain that houses key neural pathways needed for accurate, visual perception.

In essence, learning to draw is more about training your brain how to see and perceive and less about the fine motor movements of putting a pencil to paper.

A bit of basic neuroanatomy

The right and left sides of our brains (known as hemispheres) are responsible for computing and processing different types of complex information. The left hemisphere is our verbal, analytical brain. It processes facts, thinks in words and makes rational statements based on logic. The right side of our brain is our visual, perceptual brain. It is intuitive, sees how things exist in space and how parts make a whole, and processes visual information. Common dichotomies that outline this left-right brain duality include thinking vs feeling, intellect vs intuition and objective analysis vs subjective insight.

Both hemispheres of the brain gather the same sensory information from the environment. This information is then allocated between the hemispheres — it may be shared, or one hemisphere may dominate and take over, thereby inhibiting the other.

About 98% of right-handed and 66% of left-handed individuals are left-hemisphere dominant. As children, we are typically taught in left-brain learning environments using verbal discourse and written instruction, thereby strengthening our dominant left hemisphere, with far less encouragement for right brain growth.

Edwards attributes this phenomenon to the difficulties we often encounter when attempting to draw.

But have no fear, my fellow struggling artists — we can change this.

It is well known in the field of neurological research that our brains have the impressive ability to grow new neural connections throughout our lifetime, known as neural plasticity. The growth of new neural pathways promotes brain health. Learning new tasks helps facilitate focus, improves attention and strengthens our memory centers.

In service of this neural plasticity, I would like to introduce a task that is designed to access right-brain neural pathways. It is a task outlined by Edwards that is meant to steer so far from the left brain’s comfort zone that it relinquishes its power and allows for total right-brain activation. Are you ready to embark on this adventure into the realm of your right brain?

Making the shift into the right brain

First, you will need to manipulate your environment to ensure conditions are in place that are conducive to making a mental shift into the right brain. Eliminate verbal distractions and allow for one to two hours of uninterrupted time for focus and attention. You may listen to instrumental music while drawing, but music with lyrics is discouraged. For this task, you will need a lined-drawing or photograph, a pencil, eraser and two blank sheets of paper.

You will begin by turning your selected photograph upside down. You will then use one of your blank sheets of paper to cover the entire picture, leaving only one-half to one inch of the top edge of your upside down image showing (note: you do not have to begin at the top, you may begin at the bottom or on either side of the page. Also, covering the image is optional, though I found it very helpful).

You will then begin to draw what you see, revealing the covered image one inch at a time, until your drawing is complete. Because the image is upside down, the left brain is unable to compute meaning; the verbal system rejects the task and allows the right brain to work free of interference from its verbal partner. You are left — so to speak — with what your right brain perceives: intersecting lines that create various shapes and angles; open spaces and shadows of varying darkness; proportions and relationships between lines.

This is the information you will transfer onto your blank sheet of paper.

Resist the urge to peek by turning your drawn image right-side up, as this could unintentionally spiral you back into your domineering left brain.

Understand that this is not a lesson in drawing. It is a challenge — an encouragement to change the way you think and feel about drawing. Use this task to help you make the shift and unlock your right brain, if only for a moment, to help you experience the “magic” of pure visual perception.

Cadie Archer holds a Master’s degree in clinical speech language pathology. She has worked as a speech therapist at Bonner General Health for nearly 10 years, during which time she has developed a passion for working with adults who suffer from neurological impairments, acquired brain injuries, cognitive-linguistic and communication deficit, swallowing difficulties, and voice disorders.