I remember the first time I rode a motorcycle. I was 12 years old and I bought a Honda XR250 dirt bike with my lawn mowing money. When I took off and felt the wind in my face for the very first time, I knew I was hooked.

Now, some 20 years later, I still have the two-wheel bug. A couple years ago, I rode my 1980 Kawasaki 750LTD all the way down to Mexico and back—in the winter. If you know bikes at all, this is not the first choice for long-distance riding. There isn’t even a windshield. The first day or two, it was so cold, I wore every item of clothing I had packed. Even after four pairs of gloves, my hands were damn near frozen solid. Still, it was probably the most fun I’ve ever had with my clothes on—even after my chain snapped on I-5 and nearly spilled me into oncoming traffic. 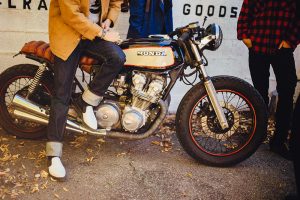 Here in Sandpoint, we don’t get to enjoy year-round riding because of the snow and ice in winter, but there is still a healthy two-wheel culture. What better way to bring motorcycle aficionados together than holding a rally and show?

Enter the first annual Bikes, Brews and Blues Motorcycle Show and Rally Ride held at MickDuff’s Beer Hall on Saturday, Aug. 27. The inaugural event will bring motorcycle lovers of all ages together for a day of riding, spectating, showing off their rides, live music, and, of course, beer.

For those interested in riding on the rally, the event kicks off at 9:30 a.m. at the Beer Hall. There, bikers will meet and kick the tires for a few minutes before blasting off east along Highway 200, then north along the Bull River Highway, through Troy, Mont. and then over to Bonners Ferry and south along Highway 95. Everyone will meet up at the Beer Hall at that point to display their bikes in the parking lot.

“My friend Seneca [Cummings] and I, along with our buddy Don [Newby] though it would be good to get a big ride together by the end of the year,” said Scherbarth. “We were thinking maybe 20 or 30 people might show up, but so far it looks like we might have a couple hundred people coming.”

The show part of the event will be held in the parking lot outside of the Beer Hall, which will be cordoned off so beer lovers can sip and spectate. Awards will be given out for oldest rider, oldest bike, best paint job and most unique, plus a people’s choice award where everyone can vote on their favorite bike.

Miah Kohal Band will be playing live music in the courtyard from 3-6 p.m. and Mandala Wood-Fired Pizza will be on hand to serve hot pizza to the crowds.

For Scherbarth, the rally and show is a way to bring bike lovers together in Sandpoint. If you are interested in taking part in the rally or showing your bike, it’s free to enter both events. For more information, call the Beer Hall at (208) 209-6700.