On the Bonner County Planning and Zoning Commission agenda for Aug. 27 is a code change that, if enacted, would streamline and simplify the permitting process for certain types of mining operations, opening the way for a proliferation of industrial operations in rural zones throughout the county.

The ordinance change would put in place a regulatory instrument called a “certificate of zoning compliance,” which the planning director could issue administratively. According to the draft changes, the director could issue certificates for “batch plants; temporary mining stone quarries, gravel pits and stone mills; and open pits” in forest, agricultural and rural zones — though batch plants will need to exist “outside of city impact areas.” Currently, such operations are only allowed in industrial zones.

Opponents see the ability for the planning director to approve such operations administratively as opening the door to batch plants across the county with little to no public input. Sagle resident Susan Drumheller said the proposed code change is an example of rural areas being treated as industrial areas across the county — something she believes most residents do not want. 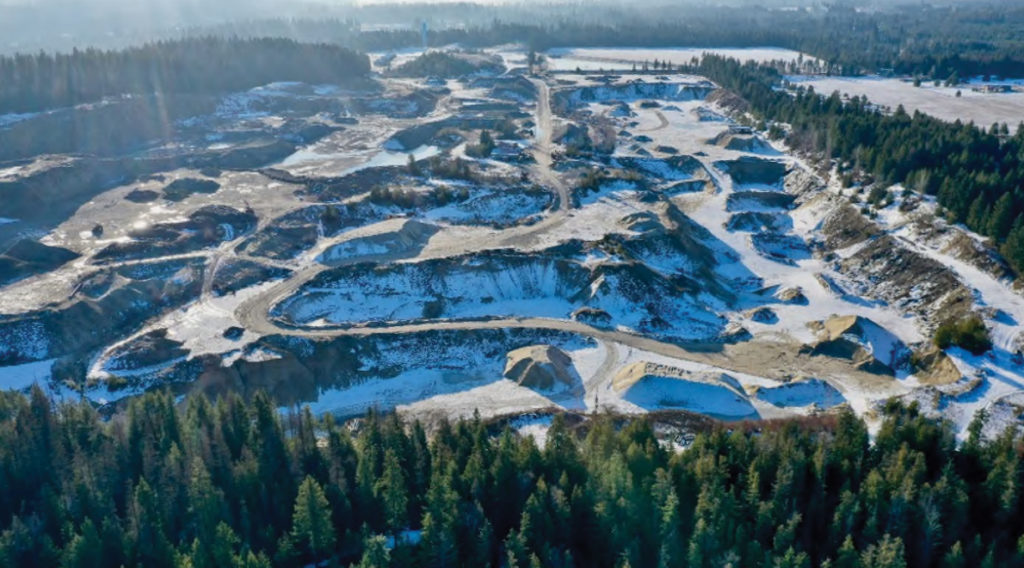 “This is completely disregarding what the county officials have been hearing from people at many, many meetings over the last three years as the county develops the subarea plans,” Drumheller said. “I participated in several of those subarea plan meetings for the Sagle area, and it came through loud and clear that Bonner County citizens want to preserve the rural character of their rural neighborhoods. They did not say they wanted industrial uses allowed next door. It appears the county’s outreach has solicited input that they are just choosing to ignore.”

Leading the way in opposition to the code change are the same people who are in the midst of a court battle against the county regarding a proposed asphalt batch plant: a group of Sagle residents organized as Citizens Against Linscott/Interstate Asphalt Plant. The group has been fighting against an Interstate Concrete and Asphalt plant proposed to be moved from Sandpoint to Frank and Carol Linscott’s gravel pit in Sagle since the project permit was submitted late 2018.

Though the lawsuit regarding the legality of the Linscotts’ conditional use permit is still playing out in appeals court, the county did concede to a separate complaint by the plaintiffs: the Bonner County revised code that allows batch plants outside of industrial zones wasn’t properly noticed back in 2018, and therefore is void.

Both parties came to an agreement on the latter complaint in mid-July, and the District Court executed the agreed upon judgment.

Ollerton told the Reader that “the code change will address what was voided, but will also update a code that addresses an essential industry in the future of Bonner County,” referring to mining.

“This mining ordinance could lead to many asphalt plants in Bonner County, [and] in turn, many lawsuits, which would ultimately fall back on the taxpayers,” Jonna Plante, a member of Citizens group, told the Reader. “We must do something now, before our county becomes known for one thing: batch plants.”

New permanent gravel pits will still be required to go through the conditional use permit process, Planning Director Milton Ollerton said, but “temporary gravel pits are allowed with a zoning certificate in order to allow for projects that are limited in scope such as building roads in a subdivision or repacking miles of roads.” Permanent pits are defined as having been in operation for more than five years, while temporary pits have been in operation for fewer than five years.

Ollerton said certificates of zoning compliance come with a list of specific standards, while conditional use permits allow the planning commission to “negotiate” standards.

“For example, with the zoning certificate, the setbacks for a batch plant would be 200 feet from the property line. With a CUP, the Planning Commission may determine that the gravel pit is surrounded with large-acre open fields and choose to allow the setbacks to be 50 feet,” he said. “With the certificate of zoning, [the] only negotiation on the standards would be through a public hearing.”

Ollerton said the county “continually gets asked to move out of the way of private property owners and the way they choose to use their property.”

“In continuing that effort, research around the state brings ideas on how to lessen government oversight and allow property owners the freedom they are looking for,” he continued. “The zoning certificate is one of those ideas.”

Zoning certificates, if made part of the county revised code, would be appealed to the Bonner County Board of Commissioners.

The planning commission will workshop the code change on Thursday, Aug. 20 at 5:30 p.m., though the commission has five files to work through before the workshopping will begin, likely around 7 p.m. The Aug. 27 public hearing is scheduled for 5:30 p.m. Both meetings will take place at the Bonner County Administration Building, located at 1500 US-2 in Sandpoint.

Instructions for how to join and comment during meetings via Zoom or phone are available at bonnercountyid.gov/PZHearings. For watching and listening purposes only, both hearings and workshops are live streamed through YouTube on the Bonner County Planning channel. The board chairman may allow comments from those joining remotely during the workshop, but does not have to.

Frank Linscott declined to comment for this story, referring the Reader to Interstate Concrete & Asphalt. Interstate did not respond before press time.