Dallas Mayor Mike Rawlings, speaking about his decision to open his city to Syrian refugees, said that he was more afraid of domestic attacks rather than those inspired by Islamic militants.

A mass shooting data base (limited to a minimum of four deaths) gathered by the journal Mother Jones supports Rawlings’ position. In 73 mass shootings since 1982, Islamic militants were involved in only three.

Professors Charles Kurzman and David Schanzer have published a broader study that identified Islamic terrorists as responsible for 50 deaths since 9/11.  In stark contrast they found that “right-wing extremists averaged 337 attacks per year in the decade after 9/11, causing a total of 254 fatalities.” Americans are five times more likely to be killed by a right-wing terrorist than a jihadist.

Kurzman and Schanzer contacted 382 law enforcement agencies and found that “74 percent reported anti-government extremism as one of the top three terrorist threats in their jurisdiction,” while only “39 percent listed extremism connected with Al Qaeda or like-minded terrorist organizations.”

The federal government defines domestic terrorism as acts “intended to intimidate or coerce a civilian population; to influence the policy of a government by intimidation or coercion; or to affect the conduct of a government by mass destruction, assassination, or kidnapping.” Please note the significant “or” in this definition. 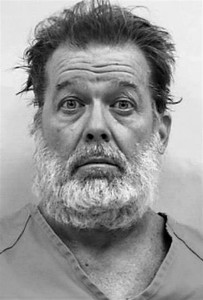 Anti-abortion extremists definitely come under this definition, and since 1977 they have been responsible for 11 murders, 17 attempted murders, 42 bombings, and 182 arsons.

The three killed in Colorado Springs by Robert Lewis Dear have been added to this list, because his anti-abortion views have now be verified. This was evident from his cry “no more baby parts” as he entered the Planned Parenthood office, and the fact that he had previously vandalized a similar facility in South Carolina.

I believe that the people who surreptitiously videotaped Planned Parenthood officers, and convinced far too many people that the organization sells fetal tissue (it does not), should be held responsible for these murders. Our elected representatives and GOP presidential candidates who continue to libel Planned Parenthood are also culpable.

Sen. Ted Cruz was thrilled to receive the endorsement of Troy Newman, President of Operation Rescue, which advocates violence against abortion providers. Cheryl Sullenger, Operation Rescue’s senior advisor, served a two-year prison term for attempting to bomb an abortion clinic in 1987.  Newman is also an officer in the phony Center for Medical Progress (CMP), which filmed the discredited videos.

In a September GOP debate Carly Fiorina claimed that the CMP videos showed “a fully formed fetus on the table, its heart beating, its legs kicking, while someone says, ‘We have to keep it alive to harvest its brain.’” The videos contain no such footage, but Fiorina refuses to back down.  Sadly, most of the GOP presidential candidates operate in a fact-free zone.

Since 9/11 there have been almost weekly attacks on American Muslims and their mosques.  These assaults can be categorized as acts of domestic terrorism “to intimidate or coerce a civilian population.” Hundreds of mosques have been either vandalized or burned down. Copies of the Qur’an have been either burned or shot through with bullets. Pigs’ heads have been thrown into mosques or onto Muslim property.

The third face of domestic terrorism in America is seen in race-based attacks. On Oct. 22, 2015, St. Louis police reported arson at seven African-American churches, presumably as retaliation for protests about the police shooting of Michael Brown in Ferguson.  Ironically, a black man has been arrested for setting two of them.

The Council on American Islamic Relations immediately responded with a statement: “Whenever a house of worship is targeted in this manner, Americans of all faiths should feel the spiritual injury and stand with those under attack.”

The largest Christian terror organization in U. S. history is the Klu Klux Klan. Using data from Tuskegee University’s Records and Research Division, it has been determined that 3,446 African Americans were lynched over 86 years. 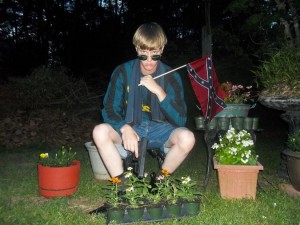 Dylan Roof posing with a Confederate flag and a .45 caliber Glock pistol.

The most recent racially motivated mass shooting occurred on June 17, 2015 at a black church in Charleston, South Carolina. After sitting with congregants in a prayer meeting, Dylan Roof opened fire and killed nine. His website contained typical white supremacist propaganda and a picture showed Roof wrapped in the Confederate flag.

Reverting to the horrors of Germany’s dark past, Donald Trump is calling for the registration of all American Muslims and the closing of their mosques.  Given the violence actions against Muslims and Planned Parenthood, the same perverted logic could be used to shut down churches that preach hate against Muslims, gays and lesbians.

Nick Gier of Moscow taught philosophy at the University of Idaho for 31 years.