Pend Oreille County Commissioners held a public hearing Wednesday evening at Newport High School to hear comments on four proposed Comprehensive Plan amendments, one of which captured most of the attendees’ comments — an amendment that would rezone all of the county’s “Public Lands” parcels. 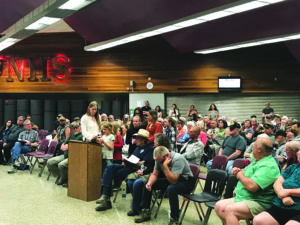 Young Sandpoint citizens gather at the mic to share their opposition to the proposed zoning changes and silicon smelter. Photo by Lyndsie Kiebert.

That amendment, proposed by the county itself, would rezone all county property classified as “Public Lands” in order to allow uses currently restricted under that classification. The amendment application states “there is no mechanism … to allow for rezoning upon the transfer of the (public) property to a private entity,” adding that properties sold by a public entity to a private one “are heavily restricted when it comes to allowable uses.” The proposed amendment would eliminate the “Public Lands” zone classification from county code and replace it with “Public/Institutional Uses.”

The public hearing, which saw about 200 people, came after the Pend Oreille County Planning Commission voted 4-2 in March to deny Pend Oreille County’s proposed comp plan amendment. However, when it comes to changes to the county’s comp plan, county commissioners have the final say.

Anti-smelter activists see the amendment as opening the door to the proposed PacWest silicon smelter and other industrial operations, while Pend Oreille County officials maintain it has nothing to do with the controversial proposal.

When asked if they had any conflicts of interest regarding the possible rezoning, Commissioner Steve Kiss acknowledged he owns property currently zoned under “Public Lands,” but said he “didn’t foresee” any financial gains should the amendment go through. Members of the audience were audibly upset with Kiss’ decision not to recuse himself.

Rich Eichstaedt, an attorney with the Gonzaga University legal clinic and representative of Responsible Growth Northeast Washington (RG*NEW), said he believed Kiss would financially benefit should the amendment be approved and uses on “Public Lands” parcels be expanded. After several comments from concerned attendees, Kiss refrained to comment further.

Representatives from both RG*NEW and Citizens Against the Newport Silicon Smelter (CANSS) made comments during a more than two hour testimonial period, along with other opponents from Pend Oreille County, Sandpoint, Hayden, Spokane and beyond. Most opposed comments pertained to the possible negative environmental and health impacts should the smelter be built. Some pointed out the rezone’s noncompliance with the Washington Growth Management Act, which emphasizes fostering industries compatible with the landscape.

“I think this will give you the opportunity to back out of the corner that you’ve painted yourself in,” said RG*NEW co-chair Phyllis Kardos directly to the commissioners, noting that the board seems to “lament” that 65% of Pend Oreille County is not able to be developed due to public land status. “That is not a curse, it’s a blessing to have these public lands. Public land is an asset, and if people want to live and work in an industrial, urbanized area, then they should do so without attempting to swallow up what little rural lands are left.”

Supporters of the zoning amendment pointed toward the valuable tax revenue that could come from developing “Public Lands” properties. Some shared that they bought such land in hopes it would be rezoned and they could one day build a home on it, and the current situation left their futures in limbo.

“We need this zoning. We need that economic growth. We need to see a change this year,” said Kathy Fazendin, owner and operator of All Faz’s Bookkeeping in Newport. “Our kids are not going to survive unless we do something different.”

Comments regarding possible compromise were also shared during testimony. Alex Stanton, a local business owner, suggested rejecting the blanket rezone amendment but then quickly providing owners of “Public Lands” a “fast track” for getting their property rezoned for residential purposes.

“Pivot, quickly, because zoning is a severe problem in this county,” he said.

The commissioners will make an official decision on whether to adopt the amendment at a future regular board meeting.

According to the Newport Miner, PacWest has been relatively quiet in 2019. Washington Department of Ecology spokesperson Brooke Beehler told the Miner she hasn’t heard from PacWest since February, when the Canadian company rejected a $2 million bid from a contractor lined up to produce an Environmental Impact Statement for the smelter project. Beehler told the Miner that DEQ and PacWest changed the scope of the EIS and a Request for Proposals will go out as soon as PacWest gives the green light.