They got the funk

New to the Sandpoint scene, Nights of Neon makes a name for itself

Running into people at the grocery store can often be a nuisance, but for Nights of Neon, it was a stroke of good fortune.

The band had been forming in earnest for a while, the brainchild of guitarist Reese Warren, who wanted to turn toward a funky project after rockabilly-ska group Still Tipsy and the Hangovers disbanded in 2018. He’d already recruited his friend and former bandmate Karston Peer to play bass but was still in the market for a singer. Enter: Michael Robinson. 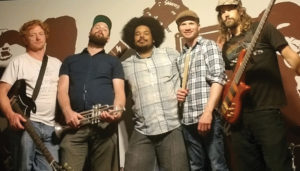 Warren had heard Robinson’s powerful, soulful voice at various karaoke nights around town, but only connected with him one night in the aisles of Super 1. Warren asked if he’d lend his pipes to his new funk band and Robinson accepted.

With guitar, bass and vocals in the bag, the next step was to get a drummer — a hot commodity among Sandpoint bands. As luck would again have it, former Atlanta-based drummer and guitarist Dan Ohmann was feeling the itch to pick up music again after a five-year hiatus. A Craigslist ad led to an audition that didn’t pan out, but it did connect him with Warren.

That was in January. In February, Warren, Peer, Robinson and Ohmann got together for their first practice.

There was one final ingredient, however: a horn, provided by fellow Still Tipsy alum Paz Rainbow, who came on board in March.

“The horn adds a major dynamic to the sound of the band,” Ohmann said. “Prior to Paz joining, the band sounded good but lacked something. The horn brought a new flavor to the band helping them to stand out among the other acts in town.”

With its lineup complete and the Nights of Neon moniker in place — “The name is funky, and that’s why we like it,” Rainbow said — the band played its first gig in July as part of the Fat Pig’s summer patio music series, followed soon after with a show at Eichardt’s.

Audiences have liked what they hear from NoN — a sound that band members describe as a whirl of soul, jazz, reggae and ’90s hip hop, but with funk solidly at its core.

“The criteria for the songs we do, with some exceptions, isn’t that it has to be pure funk, but it has to be ‘funky’ and fun,” Ohmann said.

Playing a combination of covers and originals, Rainbow said “we choose songs that have the thing, you know, the fun factor — the thing that makes you want to dance and have a good time.”

“The thing” was in evidence at NoN’s first show at the 219 Lounge and will be repeated Friday, Nov. 15 when the band returns to the Niner from 9 p.m.-midnight.

It’ll be a busy winter after that, with five more gigs currently scheduled through January: a Dec. 7 return to Eichardt’s; NoN’s first out-of-town show at the Symes Hotel in Hot Springs, Mont. on Jan. 11; another 219 show Jan. 18; and two appearances Jan. 24 and Jan. 29 at Taps on Schweitzer Mountain.

In the meantime, audiences can catch Warren in his side project CobraJet and Rainbow does double duty with The Groove Black.

It’s a lot to juggle with day jobs and families, but a packed schedule is a successful schedule, and by that standard NoN is a newcomer to Sandpoint’s music scene but one that’s already making a name for itself.

“Playing music is an escape, a very fulfilling hobby to us,” Rainbow said. “If you can create more, why shouldn’t you?