A good lookin’ good cause

Want a fast, effective way to raise money for a good cause? Gather some burly men, dress them provocatively and snap some pics. 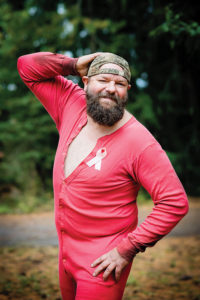 On the surface it may sound a little crazy, but for Karli and Nate Weber, it was an idea that produced. They decided a “dudeoir” — boudoir, but for dudes — calendar could be a great fundraising opportunity for Community Cancer Services, a Sandpoint organization dedicated to supporting local cancer patients with whatever they need.

The Webers contacted their wedding photographer, Tanyia Oulman, and she couldn’t wait to get started. Thus, the dudeoir photo shoots began to take shape.

The resulting photos provoke laughter, but are nonetheless beautiful. The final product is known as the 2020 Hot and Hairy Calendar, which will officially drop Friday, Nov. 15.

“You have to have some pretty open-minded men,” said Lisa Laude, one of the project organizers. “They’re fun guys.”

Some of those fun guys included Laude’s husband, brother-in-law and father-in-law, among others — all working-class men who drive trucks, work in construction, own businesses, sell cars and the like. Most volunteered by responding to a Facebook post in September seeking men who might be up for the challenge. Laude said the cause was an encouraging factor for many participants. The cover of the calendar shows the 11 models standing with the cancer survivors in their lives, some even holding photos of loved ones who have died of the disease.

“Cancer is just one of those things that everyone deals with anymore,” she said.

Laude said that the Hot and Hairy calendar came together quickly, with the casting call for models posted in late September and all the photos wrapped up in October — one of the coldest North Idaho Octobers on record.

“It was really impressive what these guys got out there and did in such extreme temperatures with very minimal clothing on,” she said, laughing.

People have the chance to meet all the models — fully clothed — on Friday, Nov. 15 at the 2020 Hot and Hairy Calendar release party at Laughing Dog Brewing. The party kicks off at 5 p.m. and will be the public’s chance to purchase a calendar and get it signed by the men of the hour. Calendars are $30 and can be ordered online for $35 at sandpointfunraising.com. All calendar proceeds go to CCS and a portion of Laughing Dog’s sales during the release party will also go to the nonprofit.

Michelle Sivertson, of Laughing Dog Brewing, said Karli reached out to her to make sure it was OK if Nate wore a shirt from the brewery in his photo shoot for the project. Sivertson happily obliged, and took the opportunity to support the effort further by hosting the release party. Laughing Dog will even release a new brew the night of the party: the 2019 DogFather Imperial Stout.

“Our Laughing Dog Brewing family, as well as ownership personally, have been affected by this ugly disease,” Sivertson said. “Community Cancer Services provides vital services to our community and we are happy to support them.”

Will the 2020 Hot and Hairy Calendar be the one and only of its kind? Thanks to its success so far, Laude said she’s heard talk that Weber, Oulman and the entire team of husky, charming models are just getting started, and that several more men have stepped forward to be involved next year.

“The ideas are already flowing,” she said.