The Worst of Circumstances:

As surely as the sun rises and winter leads to snow, trust in Idaho leaders to stumble over themselves in a race to be counted on the wrong side of a major issue. 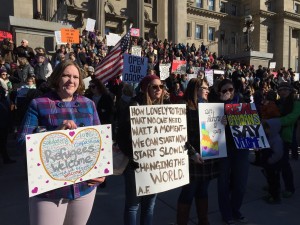 Left to right: Amanda Earley and Megan Freeman came to the Idaho State Capitol to show solidarity with refugees. Photo by Harrison Berry, used by permission by the Boise Weekly.

The tally of wrongheaded stances has become tedious and a recounting would eat the entirety of this space. Suffice to say, here we are again.

Terror bombings in Beirut, followed a day later on Nov. 13 by coordinated assaults on Paris, have left as many as 170 people dead and hundreds more wounded. Amid the mourning comes a wave of anti-refugee—and specifically anti-Syrian—sentiment. A sympathetic reading of this reaction would suggest it’s an (admittedly weak) attempt to rationalize a horrific event. Rationality, however, is as far removed from most Idaho lawmakers as the sites of these tragedies.

As Facebook fills with tricolor statements of solidarity, and calmer heads remind us that now is precisely the time to recommit to ideas of inclusion and empathy, Gov. C.L. “Butch” Otter wasted no time in hoisting his own flag:

“It makes no sense under the best of circumstances for the United States to allow people into our country who have the avowed desire to harm our communities, our institutions and our people. While I understand that immigration and refugee resettlement are authorized under federal law, I am duty-bound to do whatever I can to protect the people of Idaho from harm.”

It would take a constitutional scholar, political scientist, psychiatrist and historian to adequately pick apart everything that’s wrong with that statement. Never mind that—as far as we know—every assailant in the Paris attacks was a citizen of the European Union. Put aside Otter’s insulting, begrudging recognition that he is beholden to federal law. Try to suspend disbelief that a governor who presides over one of the worst education systems in the country, who has opposed livable wages, expansion of health care, even equal marriage rights, takes seriously his “duty” to protect Idahoans from “harm.”

What’s most galling is the suggestion that “under the best circumstances” (presumably when no one actually wants to emigrate to the United States?), it is better for our so-called “city on a hill” to be a gated community. At what time, ever, has anyone remotely suggested the U.S. invite those with the “avowed desire to harm our communities” move to this country? Does Otter think so little of our national tradition, which explicitly states this is a nation open to all “yearning to breathe free.” When we decide that sentiment is naive, or in some way threatening, we might as will ship that big green statue in New York Harbor back to the people who gave it to us.