Feeling the heat? Relief could be in sight

With temperatures lingering in the 90s for the past ten days and smoke from wildfires in British Columbia and Montana throwing a haze in the sky, August 2017 has shown echoes of the smoky summer of 2015. But, if forecasters predict correctly, relief could be in sight. 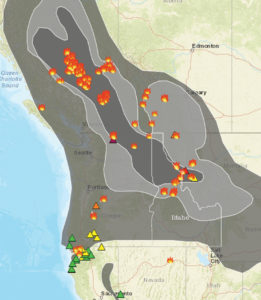 “The pattern is changing a bit,” said meteorologist Randy Mann. “Temperatures will be cooling down as the high weakens later this weekend and into next week.”

Mann said the cooler temperatures might also produce showers and thunderstorms, especially in the mountains where it is tinder dry.

“With a change in the wind direction, this should help push out a lot of the smoke,” said Mann.

A strong high pressure ridge over the West has helped circulate in smoke from the fires in Canada and Montana, Mann said, causing the air quality level to rise to “unhealthy category” near 100. Air quality of 150 or above is considered unhealthy for all people while 100 to 149 is considered risky for people with respiratory problems.

“Sandpoint was in the mid-90s for air quality on Tuesday,” said Mann. “People with some respiratory issues are advised to stay inside until levels improve.”

“We rely on a website called AirNow.gov,” said Knowles. “If the air quality index is 151 or above, that puts us into the dangerous realm. If we’re below that, according to the state standard, we’re still safe to be outside.”

The last time the air quality was measured at “unhealthy” levels was in August 2015 when Knowles had to cancel a handful of practices: “That year was the worst I’d had to deal with in seven years.”

While Knowles recognized the air quality index was below dangerous levels, he said they always err on the side of caution.

“If there’s a family that is not comfortable, we say no problem, they don’t have to practice,” said Knowles. “We always do what is best for the kids and for the families.”