The two faces of the Oath Keepers

In just over five years, the Oath Keepers have acquired something of an iconic public image.

You’ve no doubt seen them in media photos and broadcasts of media events from the Cliven Bundy Ranch standoff to the recent Ferguson riots: burly men, often outfitted in camo and military-style gear, wielding conspicuous firearms in full sight of federal officials or police officers. 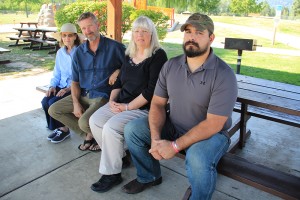 The image cut by members of the Oath Keepers of Bonner County, Idaho, makes for a startling contrast. Preparing for an interview and photo session, we ask them to arrive wearing the clothes and accouterments that best represent the Oath Keepers organization. It’s something of a surprise, then, when the members—a mix of men and women of diverse ages—show up in casual clothes without a gun to be seen.

The confounded expectations are perhaps emblematic of the Oath Keepers’ dueling identities, both in terms of public perception and within the group itself. On a national scale, the Oath Keepers are often seen by media or members of the public as a far-right paramilitary organization fueled by anti-government sentiment.

Local group members, say the reputation is unfair, instead positioning Oath Keepers as a community-focused nonprofit teaching self-reliance and emergency preparation techniques like wilderness survival, canning and knot-tying. They’re a knowledge-sharing organization, they insist, dedicated to teaching the public how to take care of themselves should the familiar systems of society fail.

“We are an apolitical organization,” said Jerrod Garcia, a founding member of the Oath Keepers of Bonner County. “We want to be all-inclusive. We want to be there for the whole community.”

While Oath Keepers members describe themselves as apolitical, it’s undeniable that the group is a favorite among conservatives, particularly those who subscribe to Tea Party values. Garcia says that’s likely due to its positions involving the U.S. Constitution, especially when it comes to gun ownership, property and speech rights.

It’s also evident in the causes in which Oath Keepers chooses to intervene, which tend to center on perceived overreaches by the federal government.

“These are causes we believe in,” Garcia said. “We don’t want to see people’s constitutional rights eroded.”

Garcia himself mobilized for  a stand-off in Oregon earlier this year with the Bureau of Land Management at the Sugar Pine Mine. Mine owners requested Oath Keeper involvement after the federal agency issued a stop-work order.

Another clash with government officials took place in Lincoln, Mont., this month when Oath Keepers organized against the U.S. Forest Service. The agency, they said, was unlawfully halting mining operations. In response, Oath Keepers teamed up with Idaho 3%—a reference to the number of colonials that fought in the Revolutionary War—to perform security operations.

More recently, Oath Keepers were among the crowd protested for Priest Lake veteran John Arnold’s gun rights after the U.S. Department of Veterans Affairs found him unfit to own a firearm. The victim of a stroke, Arnold saw his home become a hotbed of political protest after District 1 Rep. Heather Scott organized a demonstration. Bonner County Sheriff Daryl Wheeler also brought his office into the mix, saying he would resist any weapons seizure.

Whether the Oath Keepers’ demonstrations are a productive addition to these government disputes is up for debate. Certainly, senior Southern Poverty Law Center senior fellow Mark Potok doesn’t think so. He believes the presence of armed members causes undo agitation.

Oath Keepers of Bonner County members disagree. To them, these cases involve citizens whose constitutional rights are being attacked and who have no recourse but to seek their help. They’re also extemely effective publicity for the organization, local member Nancy Larned said.

In staging these confrontations, Oath Keepers spokespeople say they aren’t seeking violent confrontations with the government, even though many members arrive armed and geared up. The organization’s code of conduct state they do not seek or support an armed uprising against the federal government. Their codes of conduct emphasize that they will not fire their weapons unless fired upon.

“We work with any militia group that is willing to work with us, and what we do is to ensure they’re not crazies,” retired U.S. Army Sgt. Maj. Joseph Santoro told the Missoulian during the Lincoln standoff. “Because we know there are some folks like that in the militia groups that just want to pull the trigger on somebody, we vet them, make sure we don’t get felons or people that just want to shoot a policeman or authority figure.”

However, Oath Keepers also include among their literature government orders they refuse to follow. These include the imposition of martial law, the blockading of American cities “thus turning them into giant concentration camps,” the invasion of states that assert sovereignty, the establishment of detention camps in addition to many others.

For Potok, the list of orders reveal an undercurrent of paranoia built upon conspiracy theory. Organization founder Stewart Rhodes, for instance, has been hosted many times by Alex Jones, a broadcaster advocating conspiracy theories like the New World Order. Potok said the group’s emphasis on preparedness and survival ties into a fear of imminent martial law and despotism, and it’s no coincidence Rhodes formed the group shortly after President Barack Obama won his 2008 election.

“You can see the orders they won’t obey fall deeply into those kind of [conspiracy theories],” Potok said.

For its part, Oath Keepers of Bonner County members say that teaching preparedness skills isn’t based so much on a fear of martial law as good sense, and they’re happy to share that knowledge for free to anyone regardless of political affiliation, race, country of origin or any other identifying factor. They believe recent wildfires that have threatened North Idaho residences or the potential for mass power outages are reason enough to know how to can food, harvest resources and hunt, trap and dress game.

“The fact is we do have disasters—both man-made and natural,” said Larned.

“If there’s a big disaster, there’s just not enough government to go around,” added Garcia.

And just as group members emphasize self-reliance in the case of disasters, so too do they advocate an independence from government in their ability to lead their lives.

“A lot of government agencies would have us be dependent,” Larned said. “I refuse.”