You don’t stick around for 35 years without becoming something of a local institution. 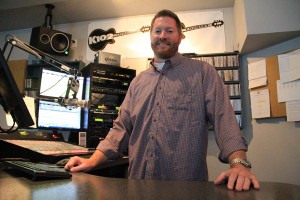 In the case of KPND and the rest of the Blue Sky Broadcasting family, that hold just as true as ever. With six stations housed within a new suite of facilities, owner Dylan Benefield is still in celebration mode for the company’s 35th anniversary back in May, and he’s anticipating plenty more to come. According to Benefield, it’s been a challenge but also a privilege to maintain its local emphasis even as the broadcasting company’s reach extended well into Washington.

“As KPND has grown, we’ve had to make sure we didn’t leave our heritage listeners and community at bay,” Benefield said.

As the founding station of what would become Blue Sky Broadcasting, KPND kicked off in 1980 as an FM license to Sandpoint. Billed as “progressive radio for the Inland Northwest, the Adult Album Alternative served up listeners a broad range of rock music, along with all the news and entertainment you would expect from a professional radio station.

“That [variety] is really the grand picture of KPND,” Benefield said.

It’s also what distinguishes the station, as well as the other Blue Sky Broadcasting offerings, from the increased popularity of Internet-based streaming services, which Benefield describes as “online jukeboxes.” You get your music to your preferred device, but it doesn’t come with the emphasis on local happenings, the personalities of the DJs and the heart and soul that makes radio an important community player.

As KPND grew, the team had to make a tough call: Should they maintain the Sandpoint focus or branch out into a more regional station? Turns out the answer was, “Both.” Both KPND and K102 Country broadcast at two different signals, with one (106.7 FM) serving the local Sandpoint population and the other (95.3 FM) reaching out to the greater Inland Northwest region.

Joining the two KPND stations and two K102 Country stations in the Blue Sky Broadcasting family are  KSPT-AM, which serves Bonner and Boundary counties with news, talk and sports radio, and ROCK 103. The latter was implemented for musical tastes that veer more toward the rock of the harder or classic variety.

The six stations are headquartered in a new 5,000-square foot studio and recently added the ability to broadcast in HD, allowing pristine digital radio for listeners with the right tuner. As voracious event promoter (KPND presents more shows in Spokane than any other station, Benefield said) and a professional staff (Diane Micahels recently earned honors as a top musical director at a recent Adult Album Alternative conference), Benefield is hopeful the next 35 years will be as good as the first.