The tech of shredding

How technology has improved snowboarding over the years

I grew up on skis and always loved skiing, but it was when I was 13 years old and strapped on a snowboard for the first time that I found a love that has endured over the years. 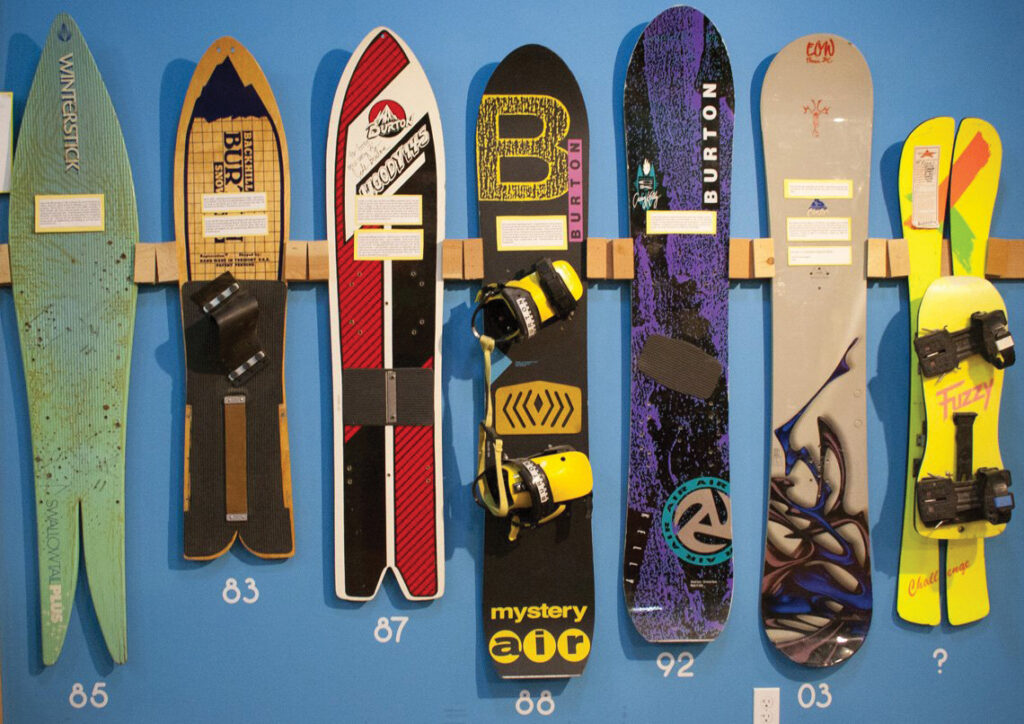 In the early days of snowboarding, surfers and skateboarders sought ways to get their adrenaline kicks on the mountain by taking pieces of wood, strapping them to their feet and holding onto a cord attached to the nose for balance. The term “snowboarding” hadn’t yet been coined, with pioneers to the sport mostly calling it “snurfing” after the pioneer Snurfer board.

In the 1970s, the Winterstick emerged with a swallowtail design that allowed the board to better float through the snow. The board was also longer, borrowing from the surfing world, allowing the rider to feel more in control as they barreled downhill sideways. Gone was the awkward cord attached to the nose.

In the 1980s, “skiboarding” took flight, with many early designs made of plastic, fiber glass and laminated wood — some even with metal fins. They were attached to your feet with a heavy bungee cord under which you stuck your toes. Early pioneers, the late-Jake Burton and Tom Sims, began introducing designs that were more user-friendly, opening up a fresh new winter sport in the process.

As more and more skiers turned to snowboards, the momentum only increased into the 1990s. Boards became lighter, with tails turned up to allow riding switch foot. Board makers began experimenting with the concept of camber, adapted from skateboarding’s concave decks to allow the boards to flex. The modern snowboard emerged with a fat nose and tail, skinny waist, parabolically curved edges and a profile that contacted the ground only under the bindings and rose everywhere else.

Just when the evolution of snowboarding seemed to hit its peak, board makers embarked on revolutionary new designs in the past two decades that proves there really is no limit to engineering the perfect board for a rider’s particular style.

Freestyle boards were light and twin-tipped, designed to spin and maneuver terrain parks and jibbing with ease. Freeride boards were designed for riders who wanted a board that could perform in the powder and the park. Finally, powder specific boards have emerged in recent years with a design that helps elevate the nose and drop the tail so your back leg isn’t burning at the end of a glorious powder day.

In 2002, Lib-Tech unveiled the Magne-Traction edge, which provided great edge hold and connected the board to the snow in a more controlled manner. “Rocker” boards emerged with a reverse camber that gave more float and forgiveness, but sacrificed precision. Some new boards have variable camber, employing traditional camber in the middle of the board, but reverse camber for the nose and tail. Directional boards are now flooding the market, as well as new split-board design and “asym,” or asymmetrical, designs that make riding on the heelside less tiring.

No matter what way you slice it, snowboarding has evolved to a fine point where a rider of any ability and type can fine tune their equipment to maximize the enjoyment on whatever part of the hill they want to ride.

If you want to learn more about the new technology snowboards have employed in recent years, visit 7B Boardshop or The Alpine Shop in Sandpoint where knowledgeable staff can help you find your own private Idaho on the mountain.