By Drake the Dog
Reader Columnist

Where am I taking my humans today? 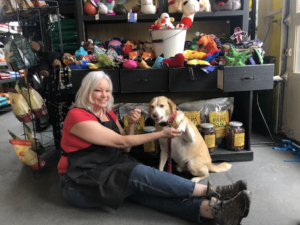 • This place was named after my best trick;

The Missus was having coffee with her friend one day, and they were jibber jabbering about the name of her new natural pet food market in town.  She wanted something catchy and not cutesy. How ’bout Nose to Tail… nope… Toe to Tail… nope…Tails up… nope! During this fur-ocious event, I was sitting ever so patiently with them waiting for a treat. Finally, the Missus dangled a cookie in front of me with the obligatory “Drake, Shakapaw!”  Before I could seize the treat, these two had a light bulb moment. The store was named after yours truly’s best trick — ShakaPaw!

Today we’re walking to 120 Cedar St. I can’t wait to see my kitty buddy, Birch, and owner Jennifer Ferguson. She is passionate about our health because she has had dogs die from cancer-related issues. Jennifer started her journey into good nutrition for her purr-fessional furry friends as she was researching the link between genetics, autoimmune diseases and unnatural substances found in everyday ingredients, which are also found in pet foods. These ingredients can contribute to dietary imbalance and disease.

Jen bought her first two rat terrier show dogs in 2009, which was a fairly new breed in the United Kennel Club and considered a miscellaneous class in the American Kennel Club.

After much whining and dining, this breed was accepted into the AKC. Good timing, since her pup — Grand Champion Stiletto’s IGO Tequila (aka Teqa) — was in the top 10 UKC rat terrier group.

Raise the ruff… she had the op-purr-tunity to register her first rat terrier litter into the AKC. Bon ap-pét-it… Jen feeds her show dogs a raw diet.

C’mon, mom; a raw diet instead of my beloved dry kibble? So I asked Jen about the pet-tential of raw diets. Here’s the Straight Poop: going raw is not a new idea. The diet is typically commercially made, balanced and is the most biologically appropriate diet for dogs and cats. Cats are obligate carnivores, which means they should be eating meat loaded with taurine. (My kitty sister Mika needs to have a diet overhaul. Where’s the meat, mama?).

Dogs belong to the canis lupus family, lupus being the scientific name for the gray wolf. Wolves hunt live prey for meat. Dogs are descended from wolves, and so our teeth are meant to rip chunks of meat and swallow them whole. We chew on bones for collagen and calcium, plus they keep our teeth clean. Hence, a raw diet helps us achieve optimal health.

Mimicking a dog’s historical diet is possible through the raw style of feeding, with slight modifications to meet the lifestyle of today’s domesticated pets.

Canned and dry food raw products, some of which are 100% non-GMO kibble, are sold at ShakaPaw. Jen wants us to understand that the physical health issues with dogs are not always about the foods and the environment — the root cause could be a result of how each individual is built and their hereditary conformation. Just like an athlete is built to do their job with minimal breakdown, so is the history behind each breed of dog. You wouldn’t put a pony on a racetrack and expect it to perform like a thoroughbred. Either way, we all deserve the best in our diet to promote a long, healthy life.