As they say, “The show must go on.” In the case of the Festival at Sandpoint, downtown music venue The Hive keeps the show going well past when crowds filter out of War Memorial Field. For the seventh year, The Hive hosts four nights of music dubbed the Aftival concert series Friday and Saturday nights Aug. 2, 3, 9 and 10. Doors for all shows open at 8:30 p.m., music starts at 10 p.m. Must be 21 or older to attend (IDs will be checked, so don’t leave home without them). 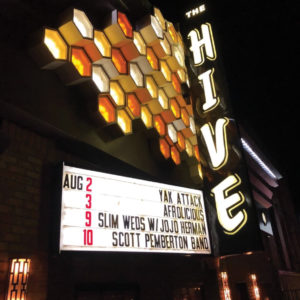 Launching this year’s Aftival series, presented by Dig Beats Productions and KPND, is Yak Attack, the “electronic power trio” from Portland, Ore. Established in 2013, Yak Attack has made a name for itself in the City of Roses with its brand of “organic electronica”: a free-wheeling all-live production in which improvisation is the engine for a totally unique experience. House, drum and bass, breakbeat, jam, funk and jazz unite in a sound that’s perpetually changing — no two shows are the same. Tickets to the Friday, Aug. 2 show are $15 advance, $20 at the door and $25 for VIP access, which gets you a special VIP entrance and entry one hour prior to doors, cocktail service, balcony view, access to VIP bathrooms and VIP credentials. Listen at yakattackmusic.com.

The second night of Aftival features the return of Afrolicious, which brought down the house at The Hive’s most recent New Year’s Eve bash. The San Francisco-based six- to eight-piece band melds together African and Latin sounds with thumping bass drops, driving rhythms and electronic breaks that add up to an irresistible funky force that never fails to fill dance floors around the world.Tickets to the Saturday, Aug. 3 show, which benefits the Music Conservatory of Sandpoint, are $20 advance, $25 at the door and $30 for VIP. Listen at afroliciousmusic.com.

The second weekend of Aftival brings Slim Wednesday, the Nashville-based project fronted by JoJo Herman of Widespread Panic fame, to The Hive on Friday, Aug. 9. Also benefiting MCS, Slim Wednesday pays homage to giants of the New Orleans funk-soul-jazz sound such as the dearly-departed Dr. John and Professor Longhair, as well as The Funky Meters, who are still going strong after 54 years. Tickets are $20 advance, $25 at the door and $30 VIP. Listen at slimwednesday.com.

Aftival 2019 wraps up on Saturday, Aug. 10 with a rock-solid rock-out featuring the Scott Pemberton Band. The Portland, Ore. native returns to The Hive after a high-energy throwdown in April, bringing his brand of surf-inflected funk-rock à la James Brown, Dick Dale, Led Zeppelin and Jimi Hendrix. If that’s not enough to get you pumped, remember that Kool & the Gang are on the Festival stage that night, too. That’s one righteous double-whammy of get-down. Tickets are $15 in advance, $20 at the door and $25 VIP. Benefits MCS. Listen at scottpemberton.com.