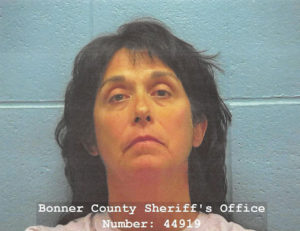 The arrest, which occurred at Carpenter’s home Aug. 1, came two years after Daryl Ramey returned home on April 5, 2017 to find his wife dead at their home on Trestle Creek Road. She had been shot twice in the head while standing near her back door.

BCSO ruled the case a murder, and arrested Nathan Utt — who lived in a camper just down the road — in the days following. Utt was exonerated the next day, having been out of state at the time of the murder.

At the time, two 9 millimeter shell casings were collected at the scene, as well as an intact 9mm projectile. While searching the area around the Rameys’ home, officers found two fresh bullet holes in a camp trailer parked on the road, along with two additional 9mm casings.

A Savage Model 99 rifle had been stolen at the time of the murder, as well as a blouse.

In February 2018, BCSO turned over the 9mm casings to ATF. The agency then ran the casings through its National Integrated Ballistics Information Network (NIBIN) program, which catalogues and compares ballistics from evidence gathered across the nation.

On May 18, 2019, the NIBIN system found a match between the casings found at the Ramey murder scene to test-fired cartidges submitted by the Lincoln County Sheriff’s Office in Montana.

Investigators connected the casings to a Glock 19 9mm pistol that Lincoln County officers seized from Carpenter during a road rage incident, which occurred shortly after the alleged murder.

Carpenter reportedly pointed a pistol at another driver while driving north on Bull Lake Road. Lincoln County authorities arrested Carpenter for assault with a weapon and confiscated two guns — the Glock and a Savage Model 99 rifle. Carpenter told deputies at the time that she found the rifle at the corner of Highway 2 and Bull Lake Road. Later, she would tell BCSO she found the rifle on the side of Trestle Creek Road and mentioned seeing a homeless man in the vicinity.

BCSO received both guns from Lincoln County on June 10, 2019 and submitted them, along with crime scene evidence, to the Idaho State Police Forensic Services Unit for analysis. Forensic investigators confirmed the casings found at the 2017 murder scene matched Carpenter’s Glock, which she purchased from Black Sheep Sporting Goods in Coeur d’Alene in 2005. Records also show that on April 3, 2017 — just days before the Ramey murder — Carpenter checked the pistol at the Canadian border.

Officials have not identified a motive at this time.

Wheeler said he’d met with Daryl Ramey following the arrest and that he seemed “very relieved.”

“It’s affected the whole community of Bonner County, and especially the community in Hope and Clark Fork,” he said. “This is really going to bring, hopefully, some closure to this incident.”

Carpenter’s bond is set at $1 million.