They’re gone. It feels tranquil now after several days with 12 (mostly adorable) hungry bodies at my table. Though I did make all three types of our favorite stuffings, I still managed to prepare only an amount of food proportional to the number of guests I was serving.

I think I outdid myself, and found it wasn’t necessary to guilt trip anyone into seconds, force-feed extra-large portions to my sons-in-law or pack up leftovers amid protests. Instead, we ate less, drank (plenty) and laughed until we cried. Sadly, I was still unsuccessful in the bid to divest myself of treasured family heirlooms that graced the lavish banquet table. It seems the longer it takes to handwash the china, crystal and flatware, the less enamored the potential heirs become with my cherished pieces.

Every chance I get, I encourage my girls to take a few treasures home, so they’ll have less to deal with “later,” but my veiled threat does little to sway them, and they don’t like to talk about “it.” Nevertheless, we did manage a bit of comic relief; sorting through a couple of boxes, they uncovered my misplaced gym bag, stuffed overhead on a garage shelf, at least 10 years ago (in my defense, I have been to the gym in the interim).

The grandkids dislike it when I remind them, “someday, this will all be yours” conversations even more than their parents do, so I did my best to tone down the banter and mockery of my eventual demise. I think I did a fabulous job. For the first time in holiday history, I don’t think I offended a single family member, and there was nary an incident of hurt feelings.

The worst happening didn’t even involve a human and occurred when we weren’t home. My visiting granddog, Penny, managed to sniff out the only food we overlooked securing during our highly anticipated trip downtown for Santa’s arrival. Unfortunately, while we were away, our carefully decorated, adorably dimensional turkey cut-out cookies were nowhere to be found. Bad Dog nearly succeeded at hiding the evidence, but teeny bits of dried icing and sprinkle residue clinging to her feathered retriever furnishings were a dead giveaway.

Thankfully this wasn’t her first foray into consuming copious amounts of “forbidden fruits,” so other than a couple of tearful toddlers, there were no further ill effects involved with her Thanksgiving bingeing. Now, if only that damn dog would develop a fondness for cranberries.

The rainy weather negated long-planned fall yard work, so it left us with plenty of time for artwork and cooking projects. I once considered myself a purist when it came to food preparations and spent days prepping my “from scratch” recipes. Still, once grilled chicken and blackened salmon started showing up on traditional Caesar salads, I decided that anything goes — and began to lighten up my traditionalist mentality.

And, honestly, now that I have so many little helpers, I’ve embraced the timing-saving shortcuts I once disdained. For example, I’m no longer opposed to using canned biscuit dough to turn out dozens of mini-donuts because, frankly, my wee helpers don’t care if the dough has been punched down twice and feels light and fluffy. Their only concern is waiting for the mini-donuts to cool enough for dunking in glazes and drenching in sprinkles. Thanks to Bad Dog, we never tasted the finished turkey cookies, but the kits from Trader Joe’s contained everything we needed for cookies worthy of the center of our festive table.

These days, I don’t always spend hours roasting marrow bones or simmering a plump chicken so I can whip up a batch of steaming, flavorful soup. I was never crazy about bouillon cubes but. a few years ago, I discovered “Better Than Bouillon” bases; and, at any given time, you’ll find at least three or four flavors in my refrigerator — it’s easy and time-saving.

I’m thankful that I’ve embraced shortcuts that leave me time to savor more than food — like a day up Pine Street Woods, accompanied by my kids, their kids and one bad dog.

The bouillon base is an excellent addition to any savory dish — especially these creamy and rich potatoes. They’ll be a great addition to your holiday meal — even without an heirloom serving dish. 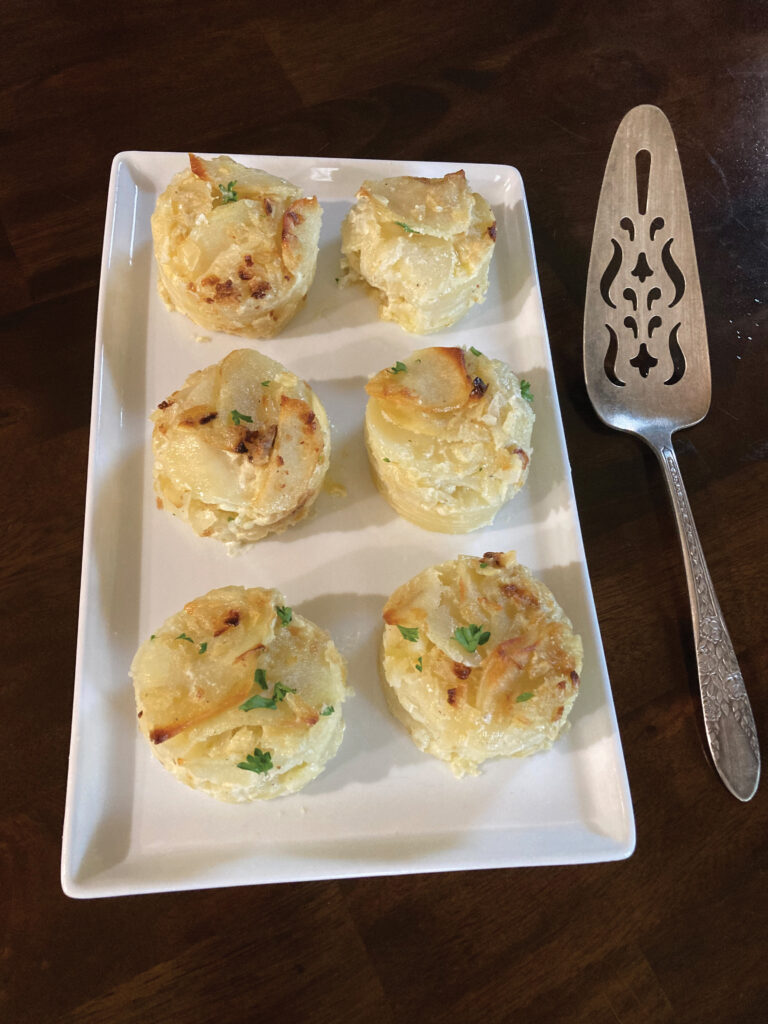 These potatoes are rich and creamy with a crusty top, and they never curdle; they’re perfect, served with any roasted meats (especially a rack of lamb). To make them extra fancy, once they have rested, cut out disks with a biscuit cutter and serve on a platter.

• 3 tablespoons butter and a little more for preparing the pan

• 2 tsp “Better Than Bullion” Stock Base (chicken or roasted vegetable)

Heat oven to 375 degrees Fahrenheit. Butter an oval 9-inch au gratin or casserole dish and layer potatoes, then lightly press to compact them.

In a saucepan, combine 3 tablespoons butter and minced onions. Place over medium-low heat and sauté, stir, until mixture is fragrant and lightly browned, about 15 minutes.

Add cream and whisk, add stock base and continue to whisk. Season with salt and white pepper.

Carefully pour cream mixture over potatoes. Bake about 30-40 until top is light golden brown. Remove from heat and allow to rest for 15 minutes. Garnish with a sprinkling of chopped parsley or rosemary, and serve.