“I am not the story here,” says Edward Snowden in “Citizenfour,” Laura Poitras’s Oscar-winning documentary covering his exposure of the National Security Agency surveillance programs. For Snowden, all that mattered was that the people of the United States have an informed choice as to how much or how little of their life the government has access to. His reticence to talk about himself has only bolstered the strength of that disclosure. 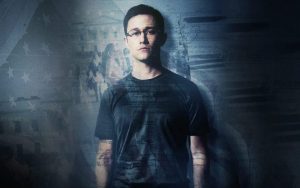 That complicates the premise behind Oliver Stone’s “Snowden:” The film aims to explore Snowden’s personal life while also explaining how the NSA collects data and what exactly that means to everyday citizens. It’s a balancing act, but Stone’s storied history with political filmmaking and larger-than-life-characters (“The Doors,” “W.,” “JFK,” “Nixon”) gives him the right pedigree to pull it off. Or so one would think.

At its best, “Snowden” is an engaging and unnervingly factual look into modern intelligence gathering, centered around a conflicted young man played with brilliant subtlety by Joseph Gordon-Levitt. At worst, the film is a toothless biopic that constantly gets lost in the weeds.

Things go relatively well for awhile, briskly cutting between Snowden’s military beginnings and his 2013 meeting in Hong-Kong with Poitras and two journalists from The Guardian (all played to great effect by Melissa Leo, Zachary Quinto and Tom Wilkinson, respectively). The film starts to get lost in dramatization, however, when Nicolas Cage makes a distractingly bizarre appearance as a CIA officer who adds nothing to the film beyond cringe-inducing tropes (his character, a totally fictional one, is the standard “eccentric genius who said too much, so now he works in the basement”) and once you meet Snowden’s CIA instructor, Corbin O’Brien, you’re treated to an endless supply of tired authoritarian clichés that nobody outside of a George Orwell novel would actually say. It’s as though you’re watching a puppet show where Stone is standing awkwardly in plain sight.

What really sinks “Snowden,” though, is the hackneyed drama between Snowden and his girlfriend, Lindsay Mills. Occasionally there’s a vague sense of chemistry between the two, but a heaping pile of gender and Millennial stereotypes leaves Mills’ character feeling vapid and undeveloped, with most scenes between her and Snowden devolving into the same argument ad nauseam until the end of the film. It’s an inescapable problem, which is too bad, because the film does several important things incredibly well.

“Snowden’” is on point when it’s in the Hong Kong hotel room; watching three journalists and Snowden come to grips with breaking one of the biggest stories of the decade is enthralling, and in the moments where Snowden begins to understand the NSA’s power, you can’t help but sit in horrified awe right alongside him. Incredibly, Stone manages to do in a handful of scenes what print journalists have struggled with for three years: succinctly explain how the NSA’s operation works. The potential impact of this feat is enormous, but “Snowden” squanders it by spending half of its run-time focused on trite melodrama. It effectively sterilizes the impact of any revelations.

While reporting on the film in September, The New York Times referred to one of the emails leaked during the infamous Sony hack of 2014. At the time Sony had just snapped up the rights to Glenn Greenwald’s Snowden book, but Stone got his own production rolling elsewhere using different source material before Sony could get started. Nevertheless, Sony offered their own project to George Clooney, who passed, replying in an email: “Stone will do a hatchet job on the movie, but it will still be the film of Snowden.”

Clooney’s prediction was a prescient one: This isn’t the Snowden film we needed, but for better or worse, it’s the only one we’re likely to get.