After 50 years of conducting drivers’ license examinations, Robert Ashbrooke has some stories to tell

“You can tell a lot about a person by how they parallel park,” said Robert Ashbrooke.

This month, the 80-year-old Westwood resident marks 50 years of working as a driver’s license examiner. As he looks back on a half of a century of humorous encounters behind the wheel, he still claims no plans for retirement. His second retirement, that is. 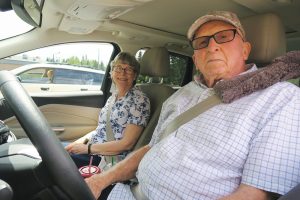 Robert Ashbrooke behind the wheel with his wife Velta. Photo by Ben Olson.

Ashbrooke first began working for the state of Washington as a driver’s license examiner in June, 1967. He administered driver’s license tests in Colfax, Wash. serving the greater Palouse area for more than a decade.

It was Robert Ashbrooke who served as a sort of final gateway between riding the bus and driving a car. Pass his test and you were in like Flynn.

“I didn’t figure I’d be there very long,” Ashbrooke said with a chuckle. “I was even looking for other jobs.”

In 1981, Ashbrooke was promoted to Walla Walla, where he moved with his daughter.Another promotion brought him to Puyallop, Wash. where he met his wife, Velta.

Ashbrooke finished his career in Washington as Assistant Regional Manager for the Bellevue area, which included greater Seattle, north of Olympia and the entire Olympic Peninsula.

“When I finally moved to Idaho [in 1993] I retired and said, ‘No more,’” said Ashbrooke. “I took a job working at Schweitzer for a while. At this time, the county deputies were doing drivers’ tests.”

Ashbrooke was training future examinors, as well as doing traffic safety talks for transportation officials. He was approached by the county, who asked if he’d like to do driver exams again since they were now employing private examinors.

So Ashbrooke came out of retirement, going back to what he knew best. He administered tests in Boise, Coeur d’Alene and Sandpoint, where he still works part time to this day. For several years he was the sole examinor in Sandpoint.

In all the years in the rear view mirror, Ashbrooke has come away with some humorous stories that still bring a smile to his face.

“You never knew what you were going to get into when you got into the car with someone,” he said.

Ashbrooke recalls some of the odder situations he’d been part of.

“One time I ended up standing in the back of a tractor to administer the driving test,” he said. “It was the only vehicle he had at the time.”

Another time, a teenager that was paralyzed from the waist down showed up with a specially modified golf cart: “He was allowed to drive the golf cart in that part of town. So I conducted the test in the golf cart.”

Once, a man arrived for his driver’s test in a brand new Cadillac.

“He told me he bought a new one every two or three years,” said Ashbrooke. “When I conducted the test, he had torn out all the back seats in this new car and there were all these goats back there. I asked him what they were for and he said, ‘They are the ones who bought it for me.’”

When asked if driving habits have gotten better or worse in 50 years, Ashbrooke admits that they’ve generally improved largely because Idaho began requiring driver’s education classes before obtaining a license.

“Remember what you were taught in driver’s ed,” he said. “If you didn’t take driver’s ed, study up on the manual. It helps.”

But comparing Washington and Idaho, he said we have far fewer requirements to obtain a license in the Gem State.

“In Idaho, you don’t have to parallel park or back around a corner,” he said. “The pass rate is around 93 percent. In Washington, it was more around 75 to 78 percent.”

It takes a lot of patience to strap into 2,000 pounds of hulking metal with a novice behind the wheel on a daily basis, but Ashbrooke has had plenty of practice.

“You just have to maintain your cool and dignity with them,” he said. “I’ve been cussed out, threatened, swung at. I’ve been propositioned. One time, I disqualified a man and he pulled over to the side of the road and said, ‘Get out.’ I had to walk back, three-quarters of a mile.”

For all the traffic he’s been through with novice drivers, Ashbrooke notes that “drivers in Sandpoint are probably the worst drivers I’ve ever seen. You never know what they’re going to do. They don’t stop behind the crosswalk, they turn into improper lanes.”

In regard to the two-way traffic transition in downtown Sandpoint, Ashbrooke notes that it is actually younger drivers that are faring better in the new layout.

“The younger drivers are paying attention to the traffic signs and the rules,” he said. “It’s the older drivers who aren’t used to going these new directions that are having a hard time.”

When not practicing patience behind the wheel with trainees, Ashbrooke has embraced the outdoor hobbies that afflict a good number of us here in Sandpoint. He enjoys fishing and boating, and in winter he still heads up the hill to Schweitzer for a day on the slopes.

“Up until three years ago I liked snowboarding,” he said.

“It’s true,” his wife Velta added. “He learned to snowboard at 65 years old.”

“Working security at Schweitzer, I always thought snowboarders were a pain in the butt,” he said. “I said, ‘If I can’t beat ‘em, join ‘em,” he said.

For now, Sandpoint drivers rest assured, the 80-year-old snowboarding driver’s examinor plans to keep guiding the tentative new drivers through their final hurdle until they obtain their licenses. I, for one, am glad he’s there.