LuLaRich docuseries doesn’t say it out loud, but it’s really about the ‘prosperity gospel’

On a basic level, LuLaRich is a four-episode expose of women’s clothing company LuLaRoe featuring a host of current and former retailers, many of whom argue that it’s a pyramid scheme that left them tens of thousands of dollars in arrears once the product quality tanked and the business structure started crumbling amid complaints from within and legal and media scrutiny from without.

Unlike similar slice-of-life/true (white-collar) crime series, LuLaRich enjoys an apparent deep level of access to founders DeAnne and Mark Stidham, as well as a number of former high-level employees. The juxtaposition of betrayed retailers, embarrassed ex-executives and unrepentant founders — intercut with loads of archival video, including deposition footage of the Stidhams drawn from one of the 50 or more lawsuits brought against the company — helps the series build methodically into an overall portrait of exploitation that was as much economic as it was psychological.

The latter is where the real importance of LuLaRich lies and what makes it so riveting. 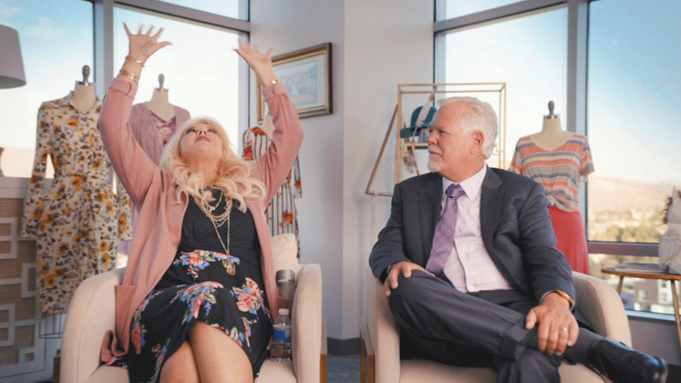 The company operated via a multi-level marketing strategy, whereby independent retailers would pay between $5,000 and $10,000 to acquire an inventory of leggings, skirts and shirts, selling them in pop-up home parties (think: Tupperware and Amway) and on Facebook Live. Retailers sent much of those profits upstream to those who recruited them into the company in exchange for bonus checks. Those bonus checks grew larger as retailers brought in others to work “downline” from them. In many cases, according to testimony from some of the highest earners, those bonus checks could rise into the five and even six figures per month, extracted from downline “teams” numbering in the thousands.

Using this model, LuLaRoe grew from a startup in 2012 to a company making in excess of $1 billion by 2016 — all that wealth flowing from the labor of nearly 1 million mostly middle- and lower-income women and filtering up to the owners themselves.

More than colorful, comfortable clothing, LuLaRoe retailers were selling a possibility: the option for women to stay home, make tons of money and still be full-time mothers. Meanwhile, they were required to post on social media touting their financial and personal successes, affixing the mandatory hashtag #becauseoflularoe. They were hammered with slogans like, “we’re blessing lives,” “choose happiness,” “#blessed,” “what is your why?,” “be you” and “happiness is a choice.”

The point of all this saccharine sentiment was to create a sense of community and family-friendly empowerment, giving women who had hitherto felt either financially stressed or relegated to secondary status in their households to “contribute to the home and society,” as one company line put it.

“LuLaRoe really takes advantage of these feelings women have,” said Becca Peters, who spent years following the rise and controversies surrounding the company. “It’s similar to an empowering message of feminism, but at the end of the day it’s the opposite.”

As evidence for LuLaRoe’s essential patriarchal nature is the company’s notion of “retiring your husband,” in so far as women retailers were encouraged to earn enough that their male spouses didn’t need to work outside the home; rather, the men would take over their profitable enterprises as in-home managers — bringing the entire family into the LuLaRoe fold.

The religious element is hinted at, though underrepresented, in the series. Notable moments occur when Mark Stidham compares himself to Mormon founder Joseph Smith, and only a few references are made to how certain Mormon communities around the country helped create nodes of LuLaRoe retailers.

Nonetheless, that affiliation is there, and writer Anne Helen Petersen, who grew up in the Lewiston area and now works from western Montana after many years as a national culture reporter, made the connection between LuLaRich and the so-called “prosperity gospel” in a lengthy interview with Meg Conley, who has written extensively on the topic. Published Sept. 15 in Petersen’s Culture Study newsletter (annehelen.substack.com), the piece titled “What Got Left Out of LuLaRich” is a deep dive into how evangelical Christianity and its trappings have long infiltrated — to the point of being indistinguishable from — the kind of freebooting scam-riddled capitalism that weaponizes motherhood and femininity in general as a particularly aggressive profit center.

The prosperity gospel is straightforward and has deep roots in the Protestant tradition in the United States. In its fundamental form, the reasoning goes that God rewards faith (in the form of obedience to almost-always-male church leaders, as well as heavy tithing) with financial and even health rewards.

The right-wing revivalists of the 20th and 21st centuries, from Oral Roberts to Jim and Tammy Faye Bakker to Joel Osteen, crafted and grafted the prosperity gospel onto conservative American Christianity to such a degree that while we might recognize it in action, we fail to see how widespread its influence really is (for more on that, read To Serve God and Wal-Mart: The Making of Christian Free Enterprise, by Harvard historian Bethany Moreton. Spoiler: Wal-Mart bankrolled the rise of the Christian Right in the mid-20th century).

Far from an aberration, the saga of LuLaRoe, as depicted in LuLaRich, is part of a long tradition of business practices that prey on an entire matrix of psychosocial forces, from patriarchal subservience to insecurity to ambition to plain old boredom, to enrich a few people at the top at the expense of almost everyone below — all in the name of freedom, faith and family.

As one former LuLaRoe retailer put it: “I sort of came to the realization, ‘Oh my God, I’m in a cult.’”

Stream it on Amazon Prime.